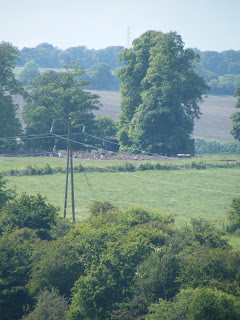 Today was the first properly hot day we’ve had on site this season; although the timely provision of ice lollies at lunch time helped keep the diggers cool! Now that the planning is finally complete (more or less) we’ve been able to commence digging features. The scoop containing animal bone has continued to produce Roman pottery (no medieval) and large pieces of animal bone; is it Roman or perhaps a bit later? Its relationship with the structure it lies within is still unclear. It may well have been related to some industrial activity as it contained fragments of charcoal. Excavation today also revealed a post-hole cut into the fill; this is officially the sites first ‘cut’ feature! (and we’ve been on site for over two weeks…). We also resumed work on the large medieval feature; removing further spits has revealed a distinct wall-line; this appears to be overlain by medieval material, but it’s not clear whether it is also medieval or whether it relates to the (presumed) Roman building.

Over by the rampart the situation is still unclear. Further cleaning is revealing a distinct line of stone, parallel to the edge of the fort. However, it varies considerably in nature along its course; to the south it appears to be a definite stone wall, but further north it becomes a rubble dump. This feature is unlikely to be the remains of the fort wall, but it could be the traces of the rear wall of a revetment; time will tell.

I also found a chance to get off site and explore the surrounding area this afternoon. Following the footpath along the edge of the field to the east of the field we are working in, it was possible to see a distinct bank running along the eastern edge. This appeared to be made up of earth and rubble. It is most likely to be the remains of the headland of an area of medieval ridge and furrow, though it might conceivably be related to Roman activity in the area. Further along, there are also a number of hollow ways leading down the slope to a low-lying marshy area; again the question arises, are these related to medieval activity at the site? Looking at the area on Google Earth, a large number of ridge and furrow like earthworks are visible all around this area; I am not entirely convinced they are medieval however. They vary in width and many are straight rather than exhibiting the sinuous S-curve associated with medieval r&f. Also there are areas of the bottom of the valley which show signs of these features which must have been too marshy for medieval ploughing. Are some of these features of medieval or post-medieval date and linked to drainage or the management of water meadows? I need to get hold of some of the estate plans for this area that are held in the archives in Durham. 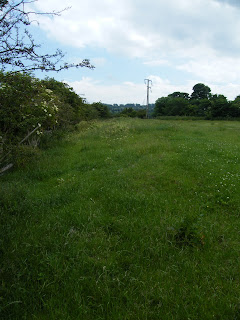 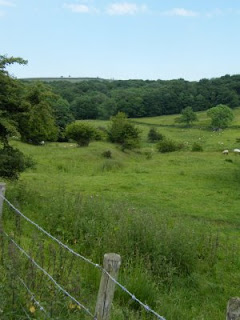