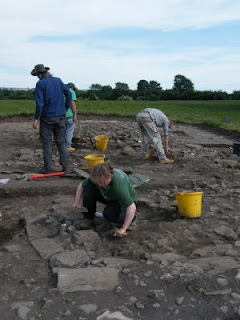 A very constructive day! After the doldrums of planning the site we are really back into the swing of digging again. We seem to be making progress in all key areas of the trench. The large medieval feature has now turned into a large post-medieval feature, as we found a fragment of clay tobacco pipe in it. This is actually very helpful; I’m happier having a big post-med pit than a medieval pit. If it had been the latter, there might have been a real possibility that many of the other features in the immediate vicinity could also have been medieval in date. However, it’s very unlikely that they are of post-medieval date. I think we have an isolated later feature here, rather than a series of medieval features. This gets rid of my nagging worries that the ‘barracks’ were actually a medieval building.

Just to the north, the other feature within the building has continued to produce bone and Roman pottery. We had a site visit from some of my colleagues from the Department of Archaeology today, and Peter Rowley-Conwy gave the bone a quick once over; it’s all small cattle, which is useful to know. There are still questions about this feature, however, as its construction is not quite clear. It could be a deposit that grew up on a scoop caused by an area of collapse or subsidence of the floor of the structure, as its base and sides consist of the same kind of stones that comprise the surrounding area. Alternatively, it might be a scoop deliberately cut into the floor and then lined with stones from the disturbed floor area. At the moment I’m inclined to feel that it’s a hollow caused by subsidence, as the stones around it appear to slump into it (see photograph below). The date is still uncertain, though it’s clearly very late or sub-Roman (l.4th century or later date). The trouble is there is virtually no diagnostic material culture of the 5th-7th century AD from the north-east. We may have to get a C14 date on some of the bone.

In the rampart area, we appear to have defined an area of stone revetment; there is also a possible irregular rubble wall nearby; it could be traces of a simple structure built against the rampart or simply a spread of rubble (we’ve got lost of those!). Finally, to the south, large areas of rubble have been removed to reveal more of the possible out-of-alignment stone building; we now have stretches of all four walls (see photo above). Interestingly the long walls appear to be slightly bowed out. This is a feature found in later first millennium AD structures (and we’re happy its certainly post-Roman), but I would have no problem it being of later date (11th-14th century). Hopefully, we’ll get some stratified artefactual material that will help us date it more precisely. 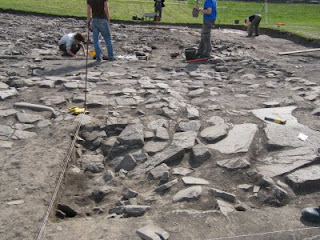 The probable late/sub-Roman feature; it is possible to see the stones slumping into it.
Posted by David Petts at 11:35