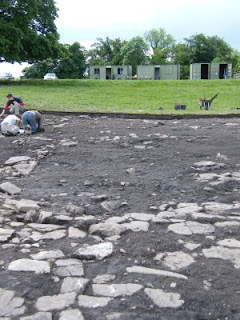 We had some much-needed rain over night. Although it has not been particularly hot, the site was already starting to dry out, making it difficult to dig. The work on clarifying the structural remains has ended up confusing matters rather than clarifying things. Some of the walls are certainly better defined, but others are less substantial than originally thought. It is clear that in some cases lengths of wall have been robbed out, whilst elsewhere they appear to be cut by pits or other possible features. The mound of rubble we originally thought might be a late ballista platform is becoming more complex by the minute; the rubble now appears to be overlying an earlier rectangular stone structure, which surprisingly is not on the same alignment as any of the other structures in the fort. The key question we really need to determine is that of chronology. Are the structures we can see late Roman or early medieval? We certainly have 4th century pottery and coinage, however, this is mainly unstratified; it is not until we start sectioning some of the pits and post-holes and getting finds from secure contexts that the question of date might start getting clearer. Confusingly, there is also a surprising quantity of late medieval pottery from the area we are digging. This is appearing in quite large fragments so is unlikely to be from manuring scatters. Is it possible that some of the structures are in fact late medieval? I think its unlikely, as the site appeared to be sealed by medieval ridge and furrow. However, this does the raise the question of how it got here; the original site of the medieval Binchester Hall is about 100m upslope, so it is quite possible that it came from there.

The key question is whether we are talking about a short late/sub-Roman chronology (sequence perhaps lasting into the mid-5th century) or a longer one (sequence lasting into 6th century or even later); we’ve certainly been playing with the idea that a large rectangular dark feature within one of the structures is an Anglo-Saxon sunken-featured building. This is highly speculative, but not entirely unfeasible, given the evidence for early medieval activity elsewhere on site. There’s only one way to find out though…. 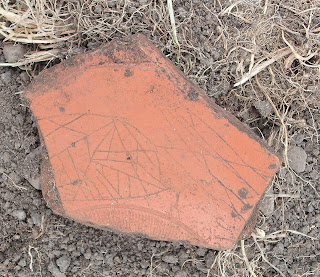