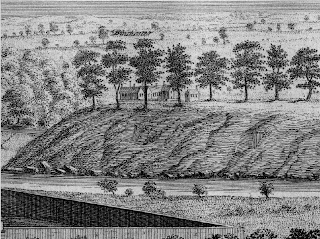 Unfortunately, as I had to spend most of the day in meetings I spent a grand total of about 15 minutes on site today, and that was more or less first thing this morning. As a consequence I'm not able to blog about today's progress in the field (although I'll do a catch up tomorrow). Instead I thought I'd mention some of the progress we're starting to make on the archival/historical research for the project. The current Binchester Hall was built in 1835 replacing an earlier structure which lay slightly to the east. It was probably demolished as it was getting perilously close to the edge of the slope leading down to the Wear, which we know was actively suffering landslips in the 19th century. Although we've always been aware of the earlier Binchester Hall, we've not known anything about its appearance. However, I've now come across an image of the Hall drawn in the 18th century (see above) on the excellent Pictures in Print website. It comes from an engraving of Auckland Castle made by Samuel Buck in 1728. Binchester can be seen lying in the background of an image of Auckland Castle, the palace of the Bishops of Durham. It shows the hall as having a central range and two gable-ended wings at either side, and a separate structure (chapel? farm house?) lying to the east. Other things to note are the lack of tree cover on the hill slope and the fact that the Wear runs tight by the base of the hill. These probably explain the problems with landslips. The fact that the slopes now have a cover of thick woodland and the river has changed course slightly help explain why the hillside has stabilised.
Posted by David Petts at 09:09