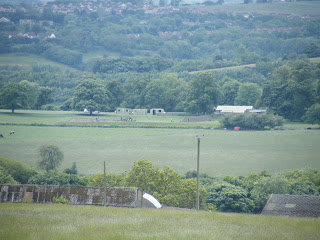 Relatively little to report today as far as on-site activity is concerned, as I had to spend most of the day in the office : ( However, I was able to pop out briefly at lunch time. Work continues on defining the possible tower; at this stage it still mainly appears to be a dump of rock, although a small stretch of walling can be identified. At the east end of the main section across the site we have started to look at the deposits close to the rampart. Its difficult to be clear what’s happening, though it is just possible that we are starting to isolate layers of dumped re-deposited natural, which may well make up the fabric of the rampart. At the other end, there has been more work cleaning the number of services which lie to the south of the wall of the main structure; it is possible that we are seeing a surface that has been repeatedly repaired and patched: but how late? Is this late Roman or sub-Roman?

Outisde the trench we’ve had a couple of good pieces of news. We’ve received a grant of £2500 from the Roman Research Trust to extend the geophysical survey; we aim cover the area to the north of the fort. GSB Prospection carried out a large-scale survey for Time Team, and identified vicus activity and an important early stage of the fort in this area; however, the large gravel plateau continues north towards the Bell Burn and we aim to use the survey to identify how far the vicus extends in this direction.

I’ve also been awarded a Beacon Fellowship, which will allow me to spend three months of my time over the next academic year developing the community side of the project; we are working closely with the Durham and Northumberland Archaeological and Architectural Society to allow members of the general public to spend time working on the site. I’ll also use this opportunity to work closely with the local community to explore other aspects of the historic environment of Binchester and Bishop Auckland.
Posted by David Petts at 12:24