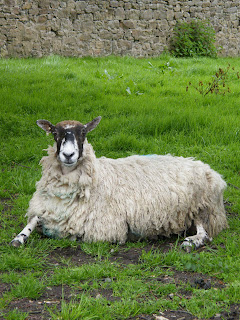 Slightly truncated entry today- I had to spend most of the afternoon in the office, so was only on site in the morning AND I've left my camera at work, so no photos (I'll add them tomorrow). This morning we had our usual weekly visit from the County Archaeologist, David Mason, I think he was impressed by the progress we've made. We also had a group of A level Archaeology students from York College coming out to visit the site before going to Durham to visit the Department. In Trench 2, it's mainly been recording again, although in the main building, the deposits are still being removed. First thing we indulged in some serious stone shifting. A little more probing in the corridor suggests the floor may not be as near as we thought... the students consoled themselves by removing a cattle skull In Trench 2, we were also planning, but Nicola and Karen were making great progress with the end of the gully where it enters the pit and Fabian continued battling away in the pit (now re-christened Fabian's Crater). Nearby, Andrew, Kim and Laetitia continued in the small rampart building containing the trough- it's going to scrub up well! Tomorrow's blog may be somewhat abbreviated as I'll be in meetings all day :-(
Posted by David Petts at 13:14