Vinovia. The Buried Roman City of Binchester in Northern England 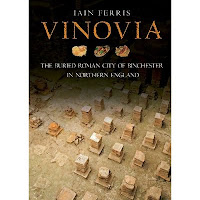 I want to highlight a new publication about Binchester: Vinovia. The Buried Roman City of Binchester in Northern England
. It is written by Iain Ferris, one of the archaeologists who led the major excavations on the commander's house in the centre of the fort at Binchester (the results of which were published recently). Iain is an archaeologist and art historian with over thirty years of experience working in professional archaeology in Britain and abroad and in teaching archaeology at several UK universities. His research interests include Roman art and material culture and Romano-British archaeology and artefacts. He has directed major archaeological research excavations in northern and midland England and has served as a member of the Archaeology Committee of the Society for the Promotion of Roman Studies. He has published widely in academic journals; his first book, Enemies of Rome. Barbarians Through Roman Eyes, was published in 2000 and his second, Hate and War. The Column of Marcus Aurelius, in 2009.

There has been interest in the site of Binchester since the sixteenth century. This book will use the results of this work to present a clear picture of the history of the site and its place in the Roman military north. It is hoped that the book will act as introduction to the site of Vinovia for the informed lay reader interested in Roman Britain in general, as well as for undergraduate students of archaeology. Basic academic notes and a short bibliography are provided, allowing those wishing to pursue in more depth the more complex aspects of the study to do so with relative ease

Available through bookshops or online from, for example, Amazon, Oxbow Books etc or direct from Amberley Publishing. For those local to the site, the book will also hopefully be on sale at the visitor centre on-site at Binchester, in W.H. Smith in Bishop Auckland, and at Waterstones in Durham and Darlington.