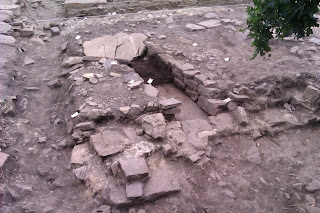 "The departure of the Americans means that excavation of the trenches is now down to the volunteers. Trench 2 saw the return of people from earlier in the season, joined by one new face and several others who have been with us for a while, while trench 1 was mainly staffed by new starters. A mixture of recording and digging took place in trench 2 (I even managed to fit in a little planning...). The main areas of work were the culvert within the western strip building, and in the northeast corner of the trench where we continued work started at the end of last week. More of the culvert was exposed, after recording was completed, and we started exposing more stones between the possible bath-house and a stone spread to the west which has previously been rather featureless. In trench 1 the main focus was on further excavation, with cobble-cleaning continuing. The main achievement was establishing the presence of cobbles on the south side of the presumed medieval building, proving that they extend beneath the building.
"
Posted by David Petts at 13:37