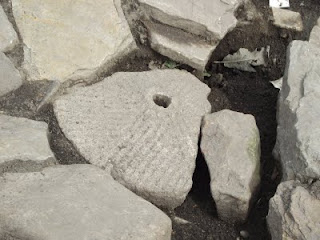 We're very much winding down now and trying to sort out the final loose ends before the end of the project on Friday. This is likely to be my last blog entry for this season unless anything exciting occurs in the next day or two.

Working in Trench 1 only, we are doing large amounts of planning so we can get all the surfaces worked on last week fully recorded. We've now finished the bread oven which has revealed a lovely cobbled floor (see picture). Elsewhere, there is still a little work going on in and around the northern end of the building (including the identification of yet another possible pit- although this one is an internal one). We've also had one of the students from Northumbria University doing some further geochemical sampling in the buildings on site.

It has been a really good seaon- thanks to all those involved. I'll try and do a full acknowledgement to everyone who has helped in the next few days. I'll also try and summarise what I think we've learned over the last ten weeks. Also, don't forget, keep an eye out for us on the BBC2 series 'Digging for Britain' which should be broadcast at some point in August.