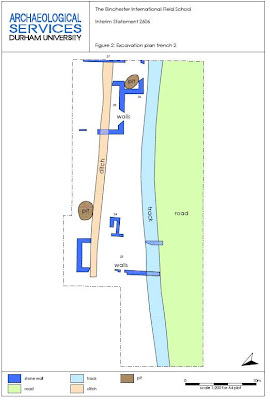 Trench 2
Trench 2 (c. 43m by 20m) was a new area of excavation positioned within the vicus to the immediate east of the eastern entrance to the fort, along Dere Street. The trench examines the northern side of Dere Street and part of the street frontage. Excavation was preceded by geomagnetic and electrical resistance surveys.

Towards the western end of the trench, a stone rectangular building was present on a north‐south alignment, approximately 4m wide and at least 12m long [23]. To the immediate north of here, elements of a small stone structure were also revealed [24]. Only the top course of the walls of these structures was revealed during this stage of the excavation.

A further stone rectangular structure was partially recorded towards the eastern end of the trench [25]. An ancillary building had been constructed onto the southern side of this [26]. A partially‐robbed wall [27] also ran along the eastern section of the excavation, the eastern face of which was obscured by the section. The lower courses of these structures were obscured by a thick dark deposit over the northeastern part of the trench, and later surfaces and rubble to the south. However, excavation of a later ditch cutting through the western wall of structure 25 revealed at least five courses surviving (0.6mhigh). Breaks in the upper course of the southern wall of structure 25 and the western wall of structure 26 may be indicative of the base of the windows. Plaster survives in situ on the wall faces of structure
26.

Contiguous with the top of these walls, spreading across much of the northern part of the trench, were surfaces comprising various elements, including cobbles, paving slabs, mortar and rubble. These may be indicative of the use of the area at this level, perhaps in conjunction with several stone‐lined pits and sunken areas, two of which are shown on the plan. These features include flat slabs in their construction, and are similar to those identified in Trench 1. Over these surfaces and covering much of the northern part of the trench was a dark deposit of soil in which large quantities of animal bone, including significant quantities of cattle skulls, was present – as in Trench 1.

Across the southern part of the trench road surfaces were present, comprising cobbles and gravels, reflecting different surfacing episodes. These were over the line of Dere Street and are likely to reflect a later use of the street as a surface in the post‐medieval period. This was demarcated on the northern side by a smaller sunken track, curving across the trench, in which wheel ruts were visible. Parallel with the line of Dere Street and further to the north, a ditch ran across the trench. The northern edge of the trench cut into the edge of a soil bank running parallel with this ditch. It is likely that all these features relate to the medieval and post‐medieval landscaping of the area, the bank marking the edge of the ploughed area to the north. Other features in the trench currently under investigation may also relate to this phase and to the robbing of earlier stone walls.
Posted by David Petts at 08:30