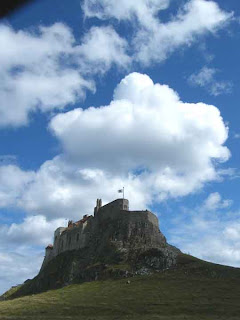 On Saturday we went on a fieldtrip to Bamburgh Castle and Holy Island. This gave the students to get a better understanding of Northumbria in the early medieval period. The castle at Bamburgh is very impressive despite extensive 18th and 19th century remodelling. However, the most exciting thing is the on-going archaeological excavation. Following on from earlier work by Brian Hope-Taylor in the 1960s, recent investigations by the Bamburgh Research Project have been uncovering traces of Anglo-Saxon activity on the site (with more stratigraphy still to get through). Graeme Young, the project director,kindly gave us a site tour. It was a salutory reminder of how different in character the more ephemeral archaeology of the early medieval period can be when compared with the Roman period. We then headed out to Holy Island to visit the site of the monastery founded on the island by Aidan and King Oswald in the 7th century. No standing traces of this foundation now survive, although the ruins of the 12th century priory refounded on the site still stand. Some of us made it as far as Lindisfarne Castle; again, the current remains are relatively late (16th century). However, the site is precisely the kind of topographical location used for secular power centres in early medieval period (such as Dumbarton and Dunadd); a little archaeological investigation of this site would certainly pay dividends.
Posted by David Petts at 09:07