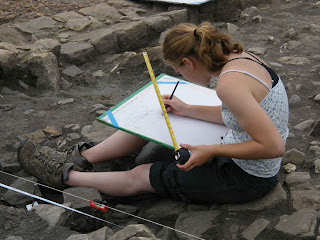 Lots going on today. In Trench One we've begun to pick off some of rubble within the smaller rectangular structure. Hopefully this will enable us to work out its precise relationship with the surrounding cobbled features (and maybe even get some kind of date for it). The big pit in the north-east gets ever more confusing; more cattle bones and now its clear that it had a recut which was clay-lined. Purpose? No idea at this stage... We are also starting to explore one of the probable ovens built int the eastern rampart. In Trench Two the main focus of work is on the linear feature that cuts across the site. Although we've broadly defined it, we're trying to clarify its precise limits. Obviously this is easy where its cut straight through stone walls, but less clear elsewhere. In the small structure to the south-east of the second strip building (with some surviving wall plaster) we are starting to get to grips with what looked like a stone lining. It is now clear that there were at least two 'layers' of the pitched stone- so currently looking more like rubble collapse than a proper stone-lined feature.
Posted by David Petts at 13:49