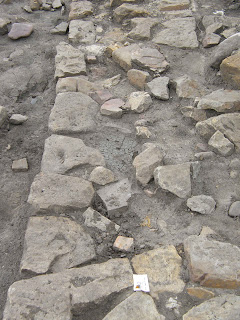 Apologies for the lack of an entry for yesterday- I was away from site all day discussing things medieval with English Heritage. Thankfully nothing wildly exciting occurred in my absence. Today, there has been a lot of plannning and levelling going on. We need to catch up with a lot of these jobs as the Stanford team finish tomorrow. Meanwhile, we've begun working on Steer's 1936 slot through the corner tower again, and continued cleaning up the south end of the barrack. The mysterious pit in the north-east corner continues to be confusing, we are now taking out the baulk to try and find out the extent of the clay-lining of the smaller recut of the larger pit. More recording and planning in Trench 2, with excavation continuing on the post-Roman linear feature. I've not mentioned one of the more interesting features of the eastern stone building in this trench. We have identified the base of at least three openings within the wall. These are unlikely to be doors; we know from elsewhere that they are not at ground level, and they are also splayed. One is also too narrow to be a convincing entrance feature. We are presuming that these are windows. In my limited spare time I've not had much luck in identifying other examples of surviving Romano-British windows in the published literature. Presumably because its relatively rare to get Roman walls surviving much above foundation level. I'd imagine there must be some from the Wall forts, I've just not had much of chance to work my way through all the site reports. Any observations or parallels appreciated. I've posted an image of one of these splayed windows above so you can see what I mean. The outside of the building is to the right, with windows splayed towards the interior on the left. There is another 'window' almost immediately adjacent (another reason why they are unlikely to be entrances). It looks like it was subsequently blocked.
Posted by David Petts at 14:06