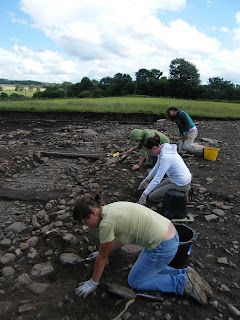 Another busy day on site- largely avoiding the rain that menaced for most of the day. Rather low on numbers for various reasons, but we still got plenty of work done. Lots of planning in Trench B- nearly have all the road planned now. Also the buildings and the areas between them becoming better defined; there clearly appear to be substantial areas of rubbish dumping, including lots of bone and pottery. In Trench A, work finding the edges of the new large medieval feature continues apace. Alongside the barrack it appears that there may also be some possible pits- date unknown. Taking the students from Stanford up to Bamburgh and Lindisfarne tomorrow for a little early medieval archaeology as an antidote to all the Roman sites they’ve seen so far!
Posted by David Petts at 13:48