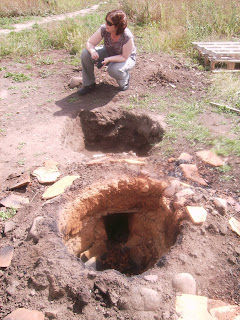 I was unable to get to site today, as I was visiting another excavation. Melissa Chatfield from Stanford and myself were in York visiting the site of the University of York's excavations at Heslington. Their dig is on the site of an area of Iron Age and Roman activity on top of the glacial morrain to the south of the city. It's an area I know well having done a little community archaeology in the village about five years ago. In recent year, due to the expansion of the University campus, there has been extensive development in the area revealing a wide range of archaeology, including a small Roman villa and the recovery of an Iron Age skull still containing a brain! We visited the site as the York project excavated a small Roman pottery kiln this year, and worked with Graham Taylor of Potted History and a local school to reconstruct it. Next year at Binchester we are hoping to do reconstruct something similar. This is of particular interest to Melissa who is a specialist in prehistoric pottery technology and is hoping to find out more about the relationship between Iron Age and Roman pottery techniques. We were shown round the site by Cath Neal, the director of the project, who gave us a real sense of the range of features found this year. This is clearly an important site, particularly as it lies in the immediate hinterland of the major Roman city and legionary fort in York. Many thanks to Cath for giving us a chance to visit.
Posted by David Petts at 00:31