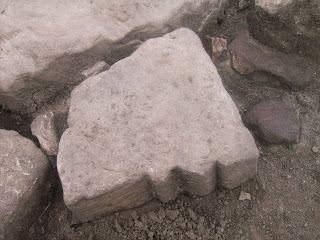 A busy day on site as the Stanford Continuing Education students return for their second day with us. We are really making great progress at the moment. A series of features, probably shallow stone-lined scoops or working hollows are becoming increasingly clear along the western side of the barrack block; they contain substantial quantities of cattle bone, particularly skull and foot bones. More generally in Trench 1, work continues in the large pit in the north-east corner; this is almost certainly not later medieval in date, and is probably late Roman or early medieval. Its function is unclear, possibly a water hole or even top of a well? Elsewhere, we are really untangling the features in the southern end of the building, including getting to grips with the recently uncovered southern gable wall. Work in this area has uncovered a small hoard of mid-4th century coins, which is pleasing.

Meanwhile in Trench 2, all the buildings are looking really nice. The work around the end of the larger strip building where there appears to be a midden dump has uncovered a large fragment of a rather nice dressed millstone, seemingly made of Rhineland lava. We have also confirmed that a possible linear feature that ran parallel to the road and seemed to cut through some of the stone buildings really is a significant feature. It clearly cuts straight through the stone walls of some of the structures: its date, however, is entirely uncertain. Finally, in this area, during work on some of the structures at the eastern end of the trench, we've uncovered a rather nice fragment of worked architectural stone (see picture above).
Posted by David Petts at 00:53