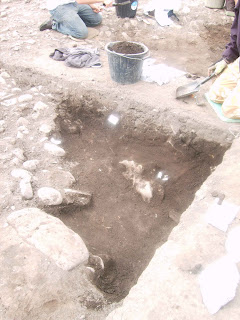 After the excitement of the weekend its back to the grindstone on site today. Things are moving really well at the moment, with plenty of features appearing across the site. One of the most interesting areas today is the large feature in the north-east corner of Trench 1 which has been producing some medieval pottery. Initially it appeared to be simply essentially a thin layer of material overlying earlier features. However, it is increasingly clear that it is actually a substantial pit. It appears to be stone lined. Its fill is mixed and contains a number of pitched stones which seem to be suggesting tip-lines. In the south-east quadrant we've uncovered a cow skull covered by a large stone, we may also have at least one more skull in the pit. In the north-east quadrant we have a big piece of shaped stone that may be part of a window - we'll know more once its been removed. It is not entirely clear whether the pit itself is medieval date; it has proved difficult to define its edges in places, and it is possible that the medieval material comes from a layer overlying the pit itself. It could conceivably be as early as late-/sub-Roman.
Posted by David Petts at 08:53