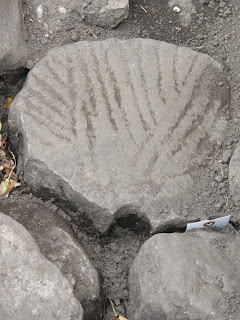 Quiet day today- everything humming along nicely. Quite a lot of planning going on at the moment; although work on the big pit in the north-east corner of Trench 1 continues apace as it gets bigger and more confusing. Photos have been taken of the stone lined area in the main building and the cow skull has been removed. We hope to start excavating the other half of the feature early next week once recording has been completed. We're also increasing the level of work in the eastern area of the trench which has seen little action so far this season. Members of the Arch and Arch are working to define the stone banks and related features and clarify the sequences here. In Trench 2 lots more work on the large ditch that seems to cut through all the strip buildings to the north of Dere Street. Clearly later than Roman activity, but otherwise lacking a date; my hunch is that its related to the medieval or post-medieval use of Dere Street. Elsewhere, we've begun investigating the area of stone slabs within the little extension to the building at the eastern end of the trench. Current interpretations include stone cist, slab-lined working area and building collapse!
Posted by David Petts at 06:02