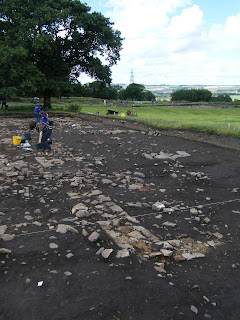 Finally, I’ve found a moment to update the blog. Apologies for the delay in catching up with this- I’ve been away on paternity leave and only just got back. Pleasingly a lot has been going on in my absence. The arrival of the teams from Stanford and Texas, as well as the presence of around 20 members of the local community means that we’ve been able to really keep up the progress we were making earlier in the season with the Durham students.

In Trench 1, we have extended the trench to the south to allow us to locate the southern end of the barrack block. In turned out that this gable end to the structure was literally just sitting in the edge of the baulk. By making the trench a little larger we’ve been able to ascertain that like the northern end wall it is of relatively light build – very different to the more substantial side walls. We’ve also got what looks like a doorway. Like the northern entrance this is not situated in the centre of the end wall, but is offset to one side. Cleaning of this area has shown that we’ve got a probable small porch structure associated with the entrance and, rather pleasingly, a stone with a probable socket hole for the door. We’ve also got a nice fragment of painted Crambeck ware from this area (see picture below- thanks to Chris Breedon for the image).

Elsewhere in the building we’ve continued to be defining and excavating the two cut features; these are increasingly complex- we have been making sure we’ve been taking plenty of soil samples. This will hopefully allow us to identify any potential plant macrofossils and industrial residues, which may help us clarify the purpose of these features. The northern feature in particular appears to have been a substantial stone lined scoop or hollow, with the stone lining contiguous with the flagstone floor of the central compartment. To the north of this feature there appears to be an area of wear on the barrack floor leading to the door in the northern gable wall. The real challenge with this entire sequence is trying to date it- it all seems post-Roman, and at least some of the features parallel the sub-Roman activity from the commander’s house; however, much of the other activity is still lacking any absolute dating. We’ll really need to ensure we develop a good programme of scientific dating to make up for the lack of diagnostic material culture, potentially including C14, archaeomagnetic and thermo-luminescence dating.

Elsewhere in this trench, the main development has been the identification of large pit or dump of medieval material in the north-east corner of the trench, just to the south of the corner tower. This amorphous feature is well-defined in some places, but we’ve yet to identify with certainty all the edges. It includes certain medieval pottery, but we also retrieved a very nice decorated jet ring and a blue glass bead of probable Roman date from it.

In Trench 2 we’ve also extended the trench slightly to better understand the northern end of the stone strip-building. This has revealed a probable midden area abutting the structure; it seems to contain substantial quantities of cattle bones, mainly jaws and other skull fragments; seemingly indicative of butchery here. Further east, the new workforce has cleaned and clarified the structural remains, including evidence for a number of other stone buildings (again seemingly associated with animal remains including jaw bones and antler fragments. One of these structures also appears to still retain wall plaster, although it is not clear whether this was on an interior or exterior face. Perhaps the biggest development in the trench, however, has been a much better understanding of the road. The roadside gully that I’d previously mentioned now appears to have a metalled base. It is not clear whether this metalling is limited to this exposed area or whether it runs under the main ‘road’. It is possible that this gully is a narrow road or path in its own right with the main rubble ‘road’ actually being a dump of stone to form a work or activity surface. Personally I think we will find that the metalling in the gully runs under the main rubble area and its part of an earlier, larger, road surface. Intriguingly, the gully also makes a distinctive curve to the south as it runs westwards across the site.

In addition to the excavation we’ve had plenty of other activity on site. We’ve had a visit from our academic advisory group who seemed excited about progress, particularly emphasising the importance of the post-Roman activity within the fort. They were more sanguine about the 4th century date of the activity in the vicus, pointing out that Binchester could probably better be grouped with the forts and towns of Yorkshire where this might be expected, rather than being placed alongside the Wall forts, where vicus activity does decline earlier. We’ve also had plenty of other visitors, including school groups. We were particularly pleased to welcome a group from Tudhoe Grange School. I’d been into visit them previously to help them learn about archaeology and the Romans in County Durham. When they came out I gave them a tour of the fort and our excavation, and they helped us with the pot washing. Finally, yesterday, we were visited by Radio 3, with the popular history broadcaster, Bettany Hughes, who came along to find out about Binchester in the Roman period and the transition to the early medieval period in northern England for a forthcoming series. 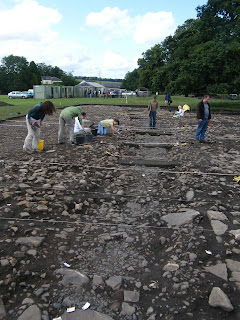 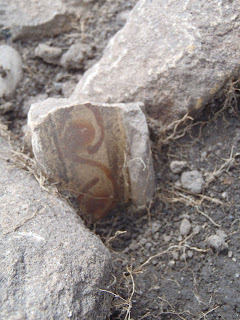