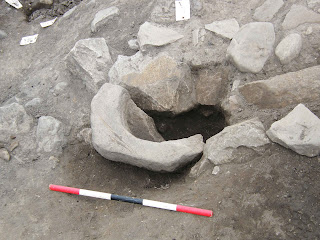 Today was hectic as we tried to tie up loose ends before the departure of the Stanford crew. Lots of last minute planning and recording to ensure that the site was in a good position to be handed over to the community group for the final haul towards the end of the project. Looking over the site we've achieved a lot in the last month. In Trench 1 we've defined the southern end of the structure and started to unpick the complex sequence of cobbled surfaces and rubble spreads in the southern half of the trench. In the northern half of the site, perhaps the major development was the discovery of the large pit in the north-east corner. This has proved to be a complex feature and is clearly far from fully excavated. It is clear that the larger pit was cut into by a later clay-lined feature. We're still not certain how deep the original pit was. It is possible that we are seeing the pragmatic re-use of an area of subsidence formed by the original pit for some form of craft-working. Today we cleaned up the stone feature that we thought might have been a stone window-head; in fact it is has turned out to be a large fragment of a stone mortar (date uncertain)- we had another smaller example from the south end of the main building last year. In Trench 2 it turns out we've now got a date for the linear feature that cuts through all the buildings to the norht of the wall (or at least a tpq for its infill), as we've found a coin dating to 1752 in its main fill. Work over the last few days has confirmed the presence of a number of shallow stone-lined scoops/depressions containing lots of animal bones (mainly cattle skulls and foot bones). These circular features appear to be a feature of both trenches. In both areas they appear to be broadly late/post-Roman in date, but we are lacking good dating evidence. I suspect we're going to need to use C14 dating to resolve this conundrum. After a long day and a final site tour our US partners headed off (at least as far as Ustinov College for a goodbye party!). They've been a really important part of the Binchester experience over the last month. We've enjoyed having them in Durham and are looking forward to their return next year!
Posted by David Petts at 11:26