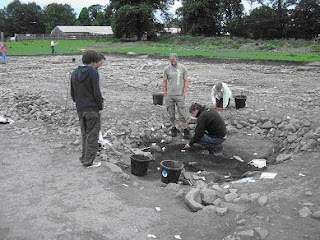 Another missive from David M.
"It would seem that the American students have taken the sunshine with them, so hurry back! Today was windy, cool with rain showers and the number of workers on the site reflected this. There were very few and one visitor from New Zealand, who expressed an interest yesterday, came and was enlisted to help plan within minutes of arriving. The four workers in the vicus continued to plan so no discoveries were made. However in the fort many of the volunteers were trowelling and hob nails were “the order of the day”. A sizeable number were discovered close to the large pit and everything pointed to them being Roman. I was also informed that the Samian pot mentioned earlier in the week had been removed and was a pretty patterned example of Samian ware. The photograph today shows Peter Carne examining the pit which has been a mystery throughout the excavation. It was also a chance for Peter to demonstrate his skills, though unfortunately to a very limited audience and for Matty to show that cold weather doesn’t affect a professional archaeologist!"
Posted by David Petts at 11:10