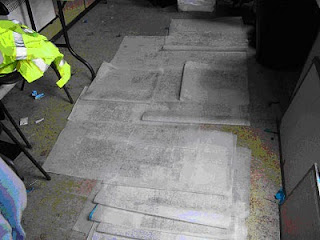 Latest news from the front via Dave Mien "Work again continues, but purely in the fort. The vicus does not now require any volunteers with Janice just checking the plans. Here we can see, somewhat roughly, how the plans come together and find another use for the site office! In the fort the volunteers trowelled in several areas. Of course “the pit” was investigated and 6 volunteers trowelled in the eastern region. Matty found several people willing to plan, however, there is still a large amount of planning to be completed. Happily there was a steady stream of visitors, so interest from the locals, and general public in still extremely strong. As for finds, there was a good amount of Roman pottery found together with several nails. Importantly a purple Roman intaglio was discovered, again in the proximity of the pit feature, and it is hoped to identify the details later. Rain arrived about lunch time and the showers became more regular with the clouds more threatening but the volunteers, as normal, worked on."
Posted by David Petts at 11:36