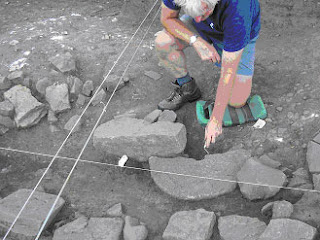 Under threatening skies the volunteers continued to work on both trenches, again largely planning. As the excavation reaches a conclusion for this year, priority lies in ensuring that the dig has been fully recorded. Due to good housekeeping and hard work from all involved, this aspect is well under control and should be completed in time. We received more visitors including the American student Miriam, who is shown on an earlier blog page, together with her family, who thoroughly enjoyed their visit to Binchester. In the small amount of actual digging that took place more pottery was found in the fort and this may be connected to the pottery vessels discovered earlier in the week. The vicus revealed an interesting example of recycling. This is a possible Roman quernstone which, as can be seen, was broken in two and one section used as a part of a relatively recent wall. The photograph also indicates the amount of planning taking place with trowelling being carried carefully, so as not to upset the strings and tapes strewn across the site. Adding to the sense of finality, two of the stalwart volunteers, Terry and Pauline, have now left the site after five weeks, but work will continue until next week.
Posted by David Petts at 11:49