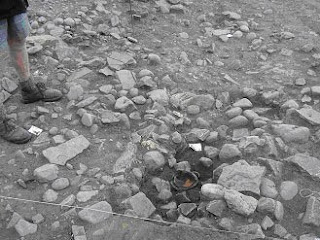 "There is a definite “end of season” feel about the excavation, with numbers of volunteers down and a desire to ensure that all planning has been completed. However this does not mean that excavation work has eased and indeed there has been an interesting find made in the fort. This caused some excitement amongst the volunteers, who all made an effort to see it in situ where it will possibly remain until next year. The find is a Samian pottery inside a larger calcified grey ware bowl and is situated in a channel close to some large cattle bones.

In the vicus the majority of the volunteers were engaged in planning, but the site of a Roman altar was identified and some continued the search for more features and goodies. It was mentioned earlier about the number of visitors the site has received and this trend was seen again today. As well as a steady flow of public visitors, groups arrived from the Archaeology Department of Durham University, Northern Archaeology amongst others, all of whom showed a great interest in the excavations."
Posted by David Petts at 11:16