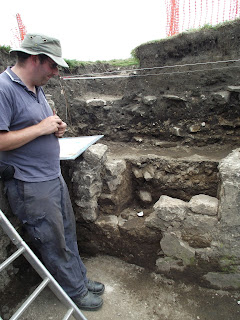 A lovely day out on site today- lots of sun. Also the end of the first week on site for our US contingent. In Trench 1, we've gone back to the corner turret. We made a half-hearted attempt on it a few years ago, but not really focused on it. This time we've begun a more concerted campaign. The location of the wall against the rampart and the wall to the left of it is clear. However, the wall to the right had not really been identified and there is no sign of the back wall either. Already we've got another course of the internal face of the wall emerging, which is very pleasing. However, the most interesting development is in the north end of the barrack block in the area we've always labelled as the officers quarters. This forms a distinct compartment including living space and a stable. Earlier this week I reported a wall had appeared in the floor of this area that appeared to underlie this structure and clearly run beneath the eastern wall. However, today we discovered that the west end of this wall didn't run under the western wall, but instead abutted against it. This means that it is later than the western wall, but earlier than the eastern wall. This is not entirely non-sensical as the area of the eastern barrack wall beneath this new wall has always looked very different in character to other stretches of masonry comprising this building. Presumably at some point the eastern wall of this building actually projected out further east in this area and our new wall formed some kind of internal division. At a later date, it seems this section was then pulled in to align with the rest of the east wall of the barrack. This all goes to show how rapidly interpretation can change on site. In Trench 2, the work on the cleaning and defining the latest layer of stones in the big room is nearly done. We now need to get it planned, then we can remove the rubble. Hopefully, this will be last layer, coming down onto stone-free deposits that we can whip through. In the smaller corridor area, where we are already down to the floor surface, we have encountered what appears to be another doorway, opposite to the one we already have between the corridor and the big room, which is very pleasing. Elsewhere the focus is on cleaning the surfaces to the west of the main structure and we've started dismantling some of the hearth structures we've found within the post-pad building Now for a well earned day off tomorrow before taking our US crew up to Hadrian's Wall on Sunday.
Posted by David Petts at 13:54