Another scorching day on site, and we have no sign of the weather breaking. I never thought I'd say this after last year's monsoon season, but I'd quite like some rain now! To business... Trench 1 was a hive of industry. A lot of planning underway in the southern half of the main barrack building. Once that is done, we'll be able to make new moves on the interior of the structure. In the central area, just to the south of the main compartment, Alistair, having found an earlier floor level, is now exploring a rather odd feature that runs across the western half of the building- it looks a bit like a flu, but there is no sign of burning or of an oven. At the west end it butts right up against the interior of the north-south wall- all very odd. Terry, Dave, Jacob and others are busy exploring another odd area, but this time outside the main structure; a small cist-y feature we uncovered last year appears to be embedded in a larger, ill-defined stone structure which is slowly appearing. Inside the 'officers' compartment, we've started dismantling the slot for horse pee; who knows what further mysteries will be encountered here. Along the northern edge of the rampart, Rachael is cleaning up the new bread oven for a photo. In the latrine area, we've pushed the trench edge back a little further to expose the gap between the rampart wall and the west wall of the latrine itself. There is a clear gap; unlikely to be a door as it would lead straight into the latrine trench; perhaps a water management feature? The latrine trench is also looking good with some discrete features being explored. Next door, in the tower interior, there is continued slogging away removing a fairly homogenous and sterile layer within the structure looking (currently in vein) for a floor. Finally, to the south, Karen has made a fantastic job further defining the complex arrangements of gullies and drains. The eastwards continuation of the west-east gulley can now clearly be seen on this side of the big pit.

In Trench 2, in the deep room, with the level to the south of the cross-wall coming down, it is now possible to start removing the remaining small pedestal of spoil we'd retained up against the cross-wall door for safety purposes. If nothing else, this will make a nicer photo! In the southern area, we are seeing a possible new surface appearing. We also now rather intriguingly have three possible socket/hinge stones- not clear whether they are in situ; they are certainly all the right way up. In the large room in the bath house, we are still seeing no major layers of stones appearing; just lots more dump.

Along the edge of the road we have a big group of people poking around at the roadside gulley, which is now increasingly well defined. Swinging around to the west we also have our open area, which still may possibly hide a building.

We had a visit from Lindsay Allason-Jones today, primarily so she could look at the head. She agreed with our thoughts that is appeared never to have been part of a larger statue. She also had some useful thoughts about some of the more mysterious jet items we've found. All in all, a very useful visitor! 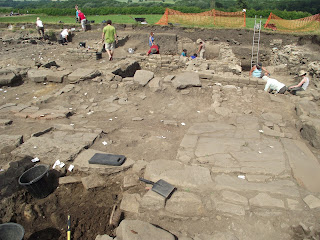 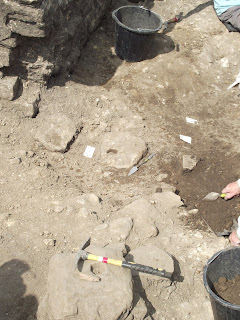 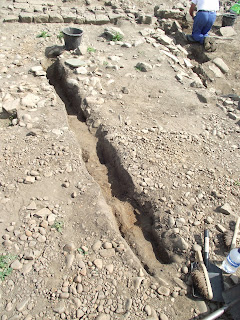 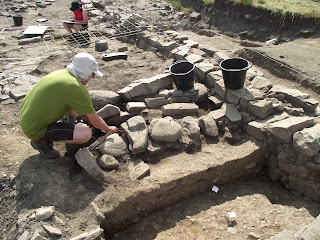