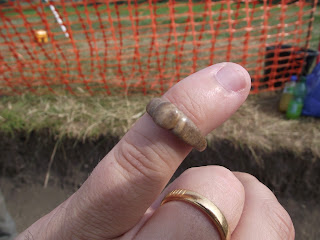 Today started off quite cool- almost like a normal summer's day, but soon warmed up to be another scorcher. Lots to report on since I was last on site (Thursday).

In Trench 1, the big news is that it looks like we finally really have bottomed the large pit! After lots of work by Jonathan and Karen it seems that we've finally got solid natural at the base of this monster hole we've been tackling for five years. We are, though, perhaps no further down the line in ascertaining its function. Our best guess is that it is some form of waterhole/well as it does seem in some way associated with the culvert for the nearby latrine. In the latrine itself, Rachael is continuing with taking down the contents of the main trench and is currently cleaning the upper area of the culvert. In the adjacent area, we have a small crew still addressing the southern wall of the tower which remains confused and poorly preserved. From my perspective one of the most interesting new developments has been on the northern gable wall of the main barrack and its associated gully. Keith has been quietly working away here exploring what appeared to be a carefully dug pit up against the edge of the gable wall. However, he has shown that it is clearly an area of subsidence and the gulley wall is fully intact, but just significantly slumped. We are at somewhat of a loss to understand what appears to be causing this clear case of very localised slumping (and presumably the other areas of slumping nearby). These events are too localised to be caused by underlying ditches that have subsided. Instead, my best guess is that they are caused by large pit like features (although the date and purpose of these putative pits is far from clear).

Elsewhere in Trench 1, we've seen more work along side the western edge of the barrack block. There is now a seemingly well defined activity area at the northern end, including the small cist/stone lined feature, a possible hearth and an associated stone setting. Further south, the fragments of new north-south wall continues to appear. Inside the building, the nice cobbles in the stable area have been recorded and drawn now. Whilst in the southern end of the building, there is a big push to unpick the interior surfaces, this has resulted in the appearance of a new cross-wall within the barrack itself.

In Trench 2, we've seen lots of progress in the big slot put through the dump layer in the large room. From the profile in the section it is clear that this contains dozens of individual tipping events, but these are two small and localised to distinguish as individual contexts in the excavation process itself. A key new development has been the appearance of an internal bench alongside the western wall of this room. In the eastern doorway (leading into the corridor) we found the articulated remains of a small mammal, possibly a cat or small dog, which we excavated carefully. To the south, we have small teams exploring the later porch structure and the small area jammed in between the porch, the main building and the post-pad building. This has shown the clear evidence of a blocked window. In the "empty" stretch to the west of the main building, we're making a final push to remove the remaining fragments of overlying soil to come down onto the nice cobble surface. Along the road edge we are continuing to remove the gully fill. Find of the day from Trench 2 was a beautiful, if fragmentary, bone ring! 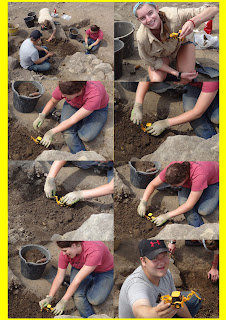 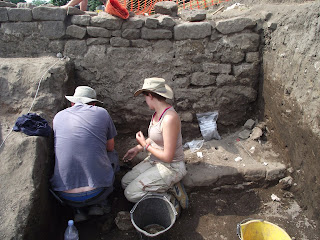 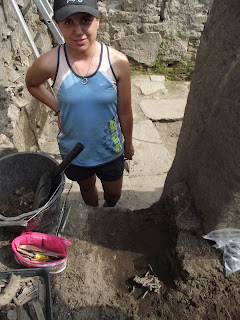 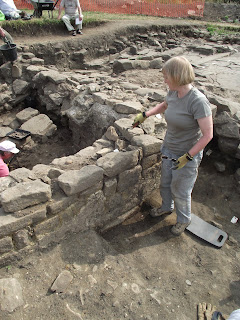 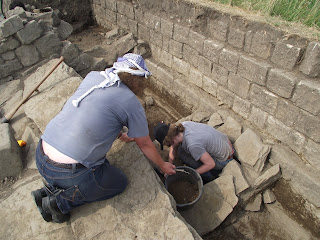 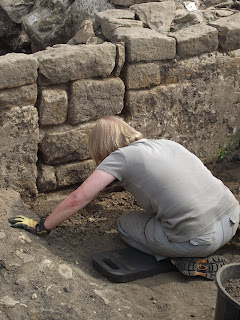 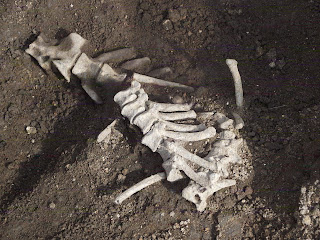 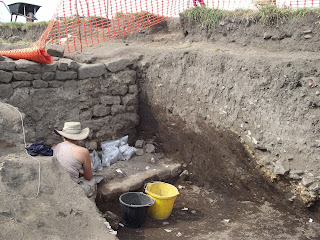 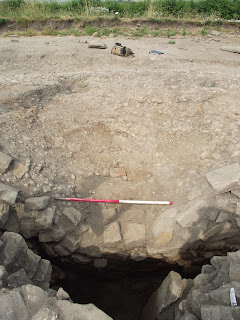