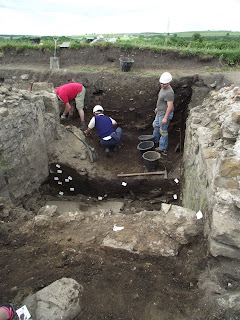 Back on site after our week's break. We welcomed 40 students from the US and around 25 members of the local community on to site today. This meant we had a really decent sized excavation crew to allow us to crack on with the work we'd begun in June. In Trench 1, most of the activity was focused on cleaning down the interior of the barrack block in both parts of the building. Already making great progress, with new floor surfaces appearing. Near the latrine a new group started exploring the course of the culvert that ran under the latrine- although they are currently focussing on the stretch of it where it entered the big pit. Talking of the big pit, Karen and Jonathan were continuing the epic struggle - today's most intriguing find from this feature was a well preserved human jaw bone. We've actually a small but not insignificant quantity of human bone (all disarticulated and seemingly residual) from this trench. I'd been assuming that some of it had been ploughed out from the known Anglo-Saxon cemetery in the central area of the fort, however, this jaw, from at least four feet down in a pit fill was clearly not derived from this source. In Trench 2, lots more activity in the post-pad building and we're intensifying our focus on the area to the west of this. We're also continuing our push in the section of the corridor to the south of the cross wall- presumably this is going to also show our regular sequence of bone dumps and stone surfaces. In the big room, we began removing the existing layer of stones, to reveal...surprise surprise... a dark layer and more stones! Finally, in the section of the corridor we've already bottomed out, we were focussing on cleaning up and cutting back the section - this is coming out very nicely showing the tip lines of the rubbish dumps quite clearly. I must admit today, looking at this building today and imagining what it will look like when we bottom out all the other areas, presumably to the same depth of our existing flagstone floor, I was struck by two things. Firstly, the sheer scale of dumping. If all rooms are at the same level (5 to 6 feet) this represents a serious quantity of garbage disposal. Secondly, we'll have an incredibly well preserved Roman structure, with walls more or less at head height with in situ wall plaster in places, evidence for blocked doorways. We'll need to think carefully about recording this- we're entering the realm of historic building survey rather than simply archaeological stratigraphy! It is going to look very very impressive... Finally, we had a visit today from Adam Stanford, our old friend from Aerial-Cam. He has been doing out vertical site shots for five seasons now. These great photos have provided us with really nice images of progress in all our trenches. He also had some new tricks up his sleeve. After his traditional shots he did a series of shots of our blocked doorway and the associated compartment. He was then able to stitch these together on the laptop in the back of his Land Rover to create amazing 3D images of this part of the site. This must be one way to go when it comes to recording the structure! His piece de resistance, however, was his work in progress researching the use of small powered 'drones' to take aerial photographs. The little plane, only about 1m across essentially ran on autopilot, navigating using GPS and coming back to the site from which it took off after 5 minutes. It struggled a little with the Binchester breeze, but it came back with loads of great high level images and video of the site. Isn't technology wonderful! 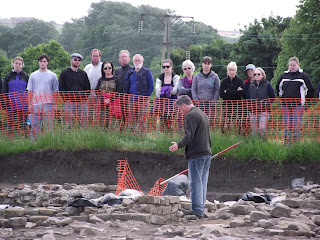 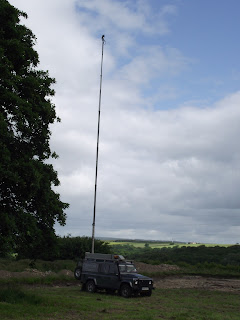 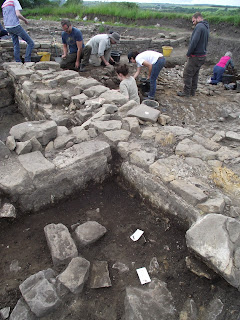 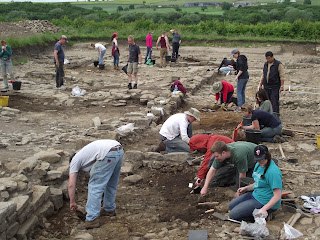 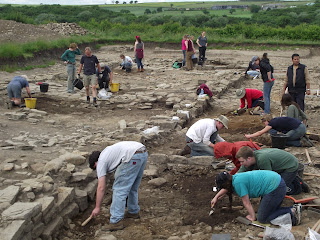