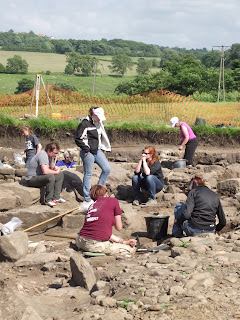 A hectic day today as we had to deal with all the fallout from the press release about the carved head, which ranged from the sensible to the more eccentric. Consequently I had to do quite a few interviews and deal with the 'Geordie God' issue! Despite all this excitement, progress on site today carried on although with no major development. Trench 1 saw the big pit (now officially "Jonathan's Pit" continue to puzzle and confuse, whilst nearby Karen persevered with the gully. Rachael's bread oven is emerging nicely although it doesn't seem to have the superstructure that survives on the other one. Lots of work carried on down both sides of the main barrack block and one of the small pits at the south end is turning into a slightly more substantial feature! In Trench 2, more general earth moving, although we saw some recording going on in and around the post pad building. Progress continued with the section of the corridor north of the dividing wall. Pleasingly no new stone layers have emerged yet- if this carries on we stand a chance of clearing out this entire section before the end of the season. Whether these structural remains turn out to be a cellar/basement or simply terraced into the hillside (although the difference is a moot ne) they are going to be impressive and we need to think carefully about how they will be conserved. Several nice finds today- a lovely key handle, a shale bangle fragment and nice bone pin! 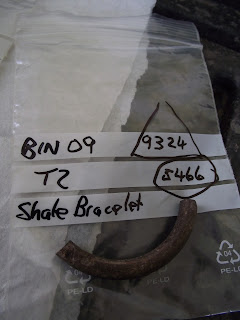 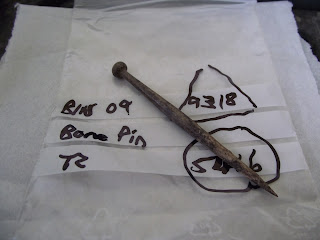