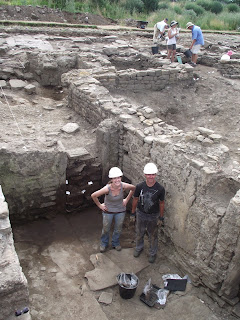 Getting quite used to this big yellow thing in the sky now, but still warm work! In Trench 1, there was still recording going on. Karen was having particular fun planning the culvert. Nearby the latrine and tower were looking particularly good. The former tidied up for a photograph before we begin removing yet more of the main internal trench tomorrow. In the main barrack structure, some of the team, having removed the tile lining of the horse-pee gully have begun to clean up a beautiful set of cobbles underlying the existing surface. Next door, Alistair has continued with the curious stone-lined channel. It clearly does not go the full width of the building, but may just possibly be turning north. It is also tentatively possible that there is a hole in the wall where it meets the channel, but this needs further work. To the west of the building, we have found yet more evidence of a parallel wall running north-south. We'd seen occasional hints of this in earlier years. However, it is now looking increasingly coherent, although it is not clear how it relates to the existing structure. In the course of exploring the northern part of this western area, Jacob found a curious stone with some kind of incised symbol on it, although it is frustratingly incomplete and with the rest of it lacking.

In Trench 2, the main event for me has been the removing of the final pedestal of earth in the northern sector of the corridor. We now have the blocked doorway in all its glory. Curiously, there are at least three cow skulls placed at the bottom of the pile of large stones that blocks this entrance. Presumably these large stones are just blocking the door; I hope we don't have a rubble dump of that scale across the entire area to the south of the cross wall or we are in for some serious stone moving. This final clearance work has also revealed some curious slots in one of the stone floor slabs, purpose unknown... Next door in the main room, we have decided to put a slot in through the debris within this area rather than taking it all out stage by stage. This goes against our general principal of removing all the sequences stratigraphically, but it will help us get a better sense of what is facing us. Intriguingly, we rapidly hit a very friable soft deposit, consisting of lots of smears of charcoal (some quite large lumps). Will this go all the way down? Hope so! 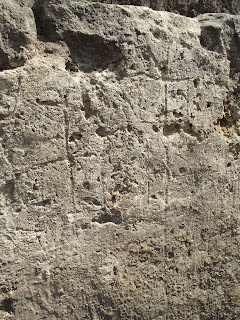 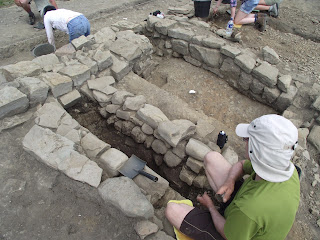 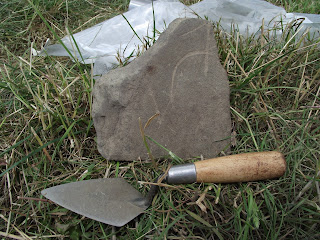 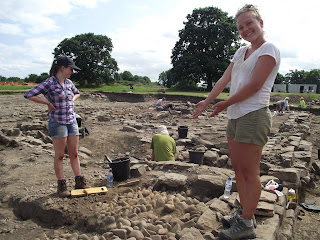 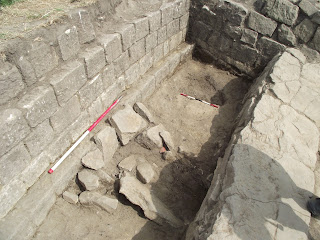 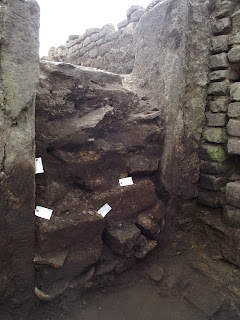 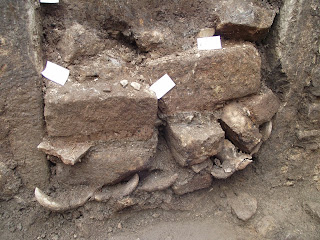 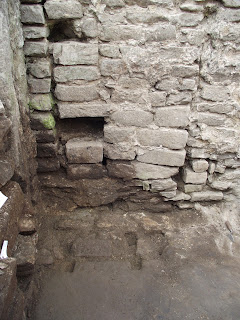