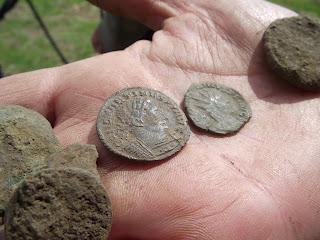 A few weeks ago our coin specialist, Dr Philippa Walton, came to have a look at the coins from last year's exvations. These are her initial comments

Around 900 coins were recovered the excavations undertaken by the University of Durham and Stanford University at Binchester County Durham in 2010. In May 2010, I examined 420 of these coins, equating to approximately half of the assemblage. Of these, 418 coins date to the Roman period.

The majority of coins recorded were recovered from unstratified or post Roman contexts and therefore the coins are not suitable for stratigraphic analyses. However, following the Applied Numismatic principles pioneered by Richard Reece and John Casey, they are useful for obtaining a better understanding of the broad chronology of the site and periods of intense activity.

The chronological distribution of coins

270 of the Roman coins were identifiable to the extent that they could be assigned to Reece periods as summarised by Table 1. A further 148 coins were recognisable in date but were either too corroded or dirty to assign to a particular Reece period. However, it was possible to assign them to a century or range of centuries by size and composition as summarized in Table 2.

The 2010 assemblage has a similar chronological range to that recovered in 2009, with coins dating from Reece period 5 (AD 96-117) through to Reece Period 21 (AD 388-402) recorded (See Figure 1). However, more second and early third century coins are represented in the 2010 assemblage and there are small peaks in the Antonine (Period 7) and Severan (Period 10) periods. This is likely to be a reflection of the earlier stratigraphic levels reached during the excavations in 2010.

However, it would not be sensible to read too much into the 2010 coin assemblage in isolation. Indeed, until the earliest stratigraphic layers have been excavated, only tentative comments on the composition of the assemblage can be offered. For this reason, the 2009 and 2010 assemblages have been combined and analysed as a single group (See Figure 2). As noted in my previous report, coin loss at Binchester is strongest in the late third and fourth centuries AD (see Figure 1) with far greater coin loss than average between Periods 14 (AD 275-285) and 18 (AD 348-363). It is not possible at present to account for this prolonged peak in coin loss. However, the peak in Period 17 is also present in the assemblage recovered from previous excavations at Binchester, as are peaks in Period 16 and 18 to a lesser extent (Reece 1991). It may indicate significant activity at the site during this period. A brief survey of other published coin assemblages from the North East (South Shields, Piercebridge, Chester-le-Street, Greta Bridge, Corbridge, Carrawburgh, Housesteads) demonstrates that a period 17 peak is not characteristic of the region although Corbridge (Reece 1991) does possess similar per mill (coins per 1000) values for the period AD 260 to 348 (Periods 13-17). Overall, this profile has far more in common with southern rural sites, although this is to be expected as only late levels have been excavated thus far. The latest coins from the site are three copper alloy nummi of the House of Theodosius. Two possess legible reverses. One is a VICTORIA AVGG issue dating to AD 388-395 whilst the other is a SALVS REPVBLICAE issue dating to the AD 388-395/402. These issues are among the latest copper alloy coins to be supplied to Britain and attests to the continued use of money at Binchester even in the very late fourth century AD. 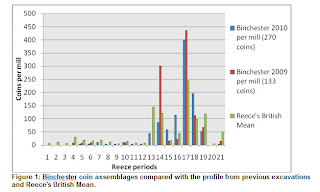 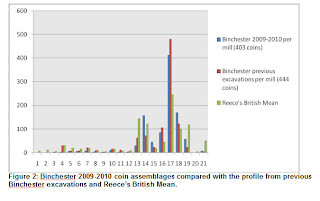 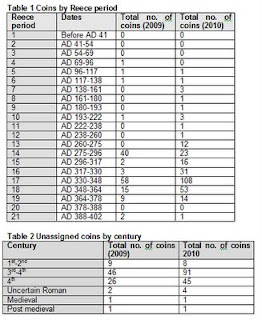