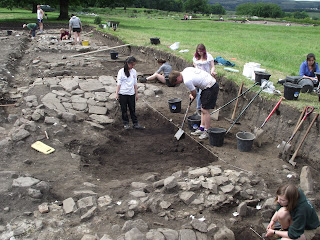 Despite gloomy prognostications, todays threatened rain never appeared. This meant that we got another full days work done on site. In Trench 1, we saw the large pit to the west of the barrack expand- it is possible to clearly see where the barrack wall has partially subsided into the bid (this has also occurred further along the wall line). Interestingly, this large pit is different from most of the other cut features on site in that it's not obviously stone lined (although there are some stones along one edge). Elsewhere, however, new stone-lined pits are appearing, including yet another one with the inevitable cow skull in the base - and we keep on finding more mandible fragments. In Trench 2 are focus has also been dominated by our pits- the eastern most one has now been drawn and photographed and can be fully excavated, the larger pit in the main building has also now nearly been bottomed out.

Given all our thoughts about the pits and animal bone on site recently, it was really pleasing to be joined on site today by one of my colleagues, Professor Peter Rowly-Conwy. He was at Binchester with a group who have been attending a Mini-Series in Archaeology run by Durham University at Newcastle's Centre for Life who had come for a day's digging. Peter is also a leading expert in the archaeological interpretation of animal bone, so we were able to quiz him about our assemblages. Obviously he could only give an impression based on rooting through muddy bags of bone and looking at the material we were actually uncovering as we worked. Nonetheless, he confirmed our suspicion that the assemblages were dominated by fragments of cattle skulls and feet bones, with far fewer bones associated with eating meat. This supports are tentative hypothesis that all our pits might be associated with tanning leather, as cattle hides often retain the feet and head bones before they are processed into leather. He also noted the presence of a range of other bones, including pig, sheep, red deer and dog. We're certainly planning a more structured analysis of all this material over the next year or so.

I've also been meaning to mention the work of one of our second-year students, Mark Household. Mark has returned to Binchester for a second year running, although this tme he is not just digging. He is also taking the chance to work on his dissertation project, which is an assessment of the utility of taking aerial photographs of archaeological sites using kites. This is not a new technique, but the advent of digital cameras means that it's increasingly easy to get some good photographs. Pleasingly, he is just been awarded some funds from the Derrick Riley Fund to support his work. He's already getting some great results - I'll post some of thedr images on the blog in the next few days. 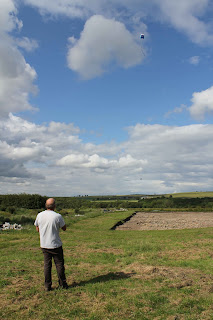