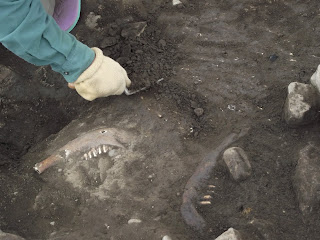 Another day in which the rain stayed away (although it's sheeting it down as I write this). Things are really crystalising as far as our 'tannery hypothesis' goes- we've been able to a little background research and things seem to converging. So let's look at what we've got. First, we have a series of pits of varying depths lined with stones, often set in clay. The sheer number of pits and their design suggests they were deliberately intended for on-going use, rather than simply to act as refuse or cess pits. Some of these pits appear to be associated with gullies and working surfaces (at least one of which has what appears to be limestone).

Associated with these pits, we've found large numbers of animal bones. These are mainly cattle and are largely head and foot bones. The fills of the pits are largely organic (with good preservation, including plum stones in the big pit in Trench 1).

Tanning is a process which has multiple stages, as the hide is progressively cleaned and preserved for later use. This involves soaking the hides in pits with a variety of substances, which may include lime, cattle brains, urine, oak bark, fruit and dog poo (yes, tanning smelt). The hides themselves usually arrived at the tanners with the foot bone and skull parts still attached. As you can see, at Binchester, we have the correct bone assemblage, a good range of appropriately sized pits and some additives (including lime and soft fruit). This all contributes towards a good working hypothesis. But there are still further things we might find that will support our arguement further. For example, it will be interesting to see if the environmental processing reveals oak bark (or dog coprolites!). Another potential field of enquiry is an exploration of the chemical signature left by the processes in the soil. Rather conveniently we were visited today by Dr Jane Entwistle and one of her students. Jane is from the Dept. of Geography and Environment at Northumbria University and a specialist in soil geochemistry. Her student, Emily Parsons, is going to help us look at the chemical signatures that survive in the pits, as part of her undergraduate dissertation. All that is left is the issue of dating!
Posted by David Petts at 14:18