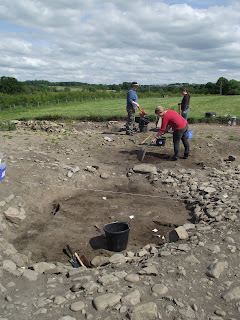 Getting into the swing of things now- the students know their way round and are able to get on well with their work. We got lots of work done today even though we had repeated showers of rain over the day. In Trench 1, we've been working well on defining the features to the west of the barrack. On the smaller building, we're really starting to get some better definition, as we continue to carefully pick away at the edges of the walls. We've now got a really clearly defined doorway, complete with a socket hole marking the position of the door (apparently we'd found this at the end of last year, but I must have missed it). Also more work on the big pit, which looks like it might be bottoming out. In Trench 2, we've nearly finished emptying out the 18th century ditch- we've been able to pick up at least one probable wall line, as the ditch gives a cross-section of the Roman layers it cuts through. There has also been splendid progress on the road, with a new, and well-defined, road surface being uncovered in several places. Plenty of finds, including more jet and fragments of at least two bone pins; the metal detectorists also got a silver denarius from the spoilheap.

Other developments include the succesful construction of our wet-sieving apparatus, which appears to work. This will allow us to carry out more environmental processing on site. Sadly, I left my camera at home, so I'll put a picture up tomorrow.
Posted by David Petts at 12:34