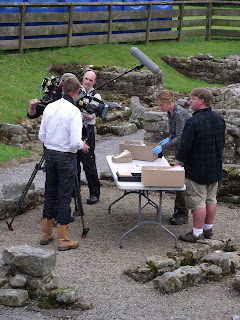 Sunshine and showers today. We were badly down on numbers and the site was not in good condition due to the rain, nonetheless, we still got a good day's work done today. The camera crew were out againand a number of us were interviewed about the project (the picture shows Rob Collins being interviewed by Alice Roberts).

There was a lot more basic planning and recording in both trenches, but there was also some excavation. In Trench 2 work continued on one of the robber trenches, whilst we continued to slowly dismantle one of the stone-lined pits. Meanwhile on Trench 1 the big pit continued to be excavated (when I wasn't standing in it being filmed) and a number of the newer pits to the east and north of the barrack were recorded. We also began an area of excavation on the rampart, trying to assess the point where the cobbles and the ramparts met - not easy in the mud. At the south-end of the trench, we were again dismantling cobbles. We have some interesting stratigraphy going on in this area. We have a large stone-lined pit within the barrack, this appears to be overlain by a very small square structure (too small to be a building) which appears to be contemporary to the cobble spread that includes our almost certainly medieval structure. This acts to emphasise the relatively early medieval nature of the pits.

Tomorrow is the last day on site for most of our Durham students- so a final push on the planning and recording and tying up loose ends. We want everything to look good for a visit from members of staff from the Dept. of Archaeology at Durham.
Posted by David Petts at 13:37