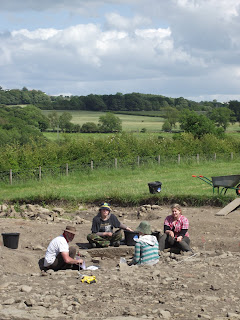 Lots of movement today, and happily no rain. In Trench 2 we completed taking out the post-medieval ditch. Some people then got to work cleaning our trench sections- not very glamorous, more gardening than archaeology, but an important job. Others got cracking with today's main task which was to move on with the removal of the blueish cobbles that made up the small track alongside Dere Street. This has revealed some more large flagstones, but not everywhere. Elsewhere, other, different surfaces are emerging, and in one place a large socketed stone- perhaps a support for a colonade or loggia? Despite the varying nature of this street frontage, it does look like we've got most of the front area of the structures along the road now, although there is a notable lack of substantial front walls. In the east end of the trench we've been able to start clearing and defining the large structure which we started looking at last year. We've given the interior a good clean. In the small extension, we identified a couple of small features cut into what looked like burnt clay. One produced a small piece of what appeared to be Calcite Gritted Ware, although of a buff colour rather than the more common grey (perhaps a sign of burning?). We've also found what, at the moment, appears to be a further small annexe to the extension, although with far less substantial walls. It may turn out to be something else entirely. In Trench 1, the hugely satisfying task of removing layers of cobbles continues. We are really getting a much better sense of the small building's context- it's still looking very medieval (something supported by the discovery of a nice medieval looking buckle from near the door). Currently, we are particularly focusing on removing rubble from the east end of the building to clarify the relationship between the building's gable end and the rubble bank that runs behind the embankment. At the big pit, the students have defined a large internal clay feature or lining, so we're still not at the bottom of it yet. They've also started to outline the edges of another large pit immediately next to it, which is intriguing. Finds from the site today included a beautiful decorated jet spindle whorl and a nice piece of decorated glass, probably a rim fragment of a late Roman bowl.
Posted by David Petts at 12:58