Apologies for the lack of blog yesterday, I had to go up north to give a talk about the project to the splendid Bamburgh Research Project . Today we entered the penultimate day on site, although there is no sign of slowing down as we head straight for the finish line. We also had lots of visitors- including Dr Pam Graves from Durham University and camera people from the University and Archaeosoup. 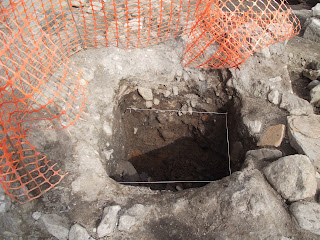 In Trench 1, the dark areas continue to expand- we benefitted from a visit from Dr Mike Church from the Department of Archaeology who was able to distinguish areas of burning in situ from secondary dumping layers and also identified the possible presence of charred barley grains in the burnt debris. Further investigation of the large fire reddened area suggests that it might be secondary dumping of burnt material from elsewhere- it was clearly subject to sustained and high temperature burning, but a section put through it today showed the layer of soil beneath it to be lacking in any sign of the scorching that might be expected if the burning had occurred in situ.

Other work in Trench 1 has included identication of a possible well (or at least a deep straight sided pit)- an area of slumping investigated on Tuesday as a sondage resulted in a pit nearly 2m deep with clear indication from careful coring with a road iron that the internal deposits continued downwards.

In Trench 2, we seem to have finally bottomed our road front section, with the appearance of the probable foundations of the bath-house and what looks like patches of natural. In the adjacent road front areas, the patchy area of stones and dark material continues to be a patchy area of stones and dark material. However, in the metal working area, a previously vague line of stones had transformed into a proper stretch of walling of at least two courses. It is not clear how this relates to either the bath-house or the road front- investigation at the point where the road front wall and this new wall should intersect has proved uninformative.  Yet more crucibles have appeared and the remains of a cluster of small bronze rivets and an iron blade which suggests that this was originally a knife with a riveted handle. A very peculiar stone object came from this area- it is either a stone pot lid or more likely a base for a stone vessel.

Down the side of the bath-house, there are small number of mysterious new features appearing the porch area, including some of our voidy stake-holes and a distinct patch of burn clay. In this area Michelle discovered another nice bone needle.

Other top finds over the last days include more crucible fragments, various copper alloy "things" and the detectorists recovered another great brooch. 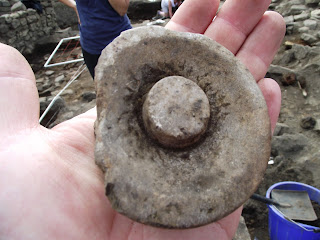 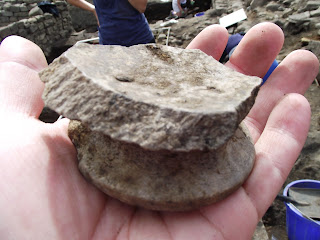 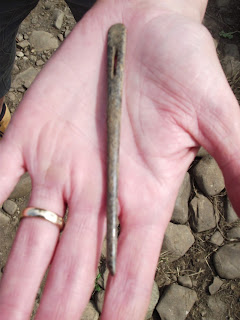 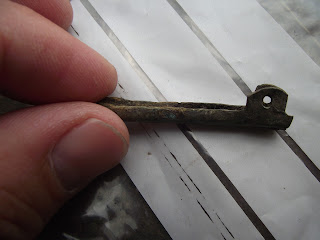 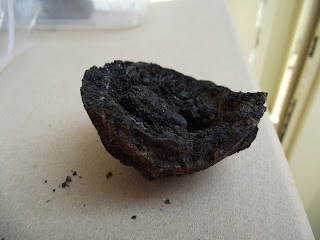