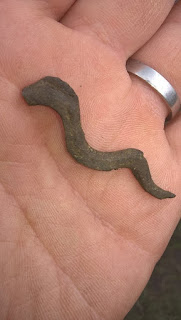 A busy day, although the end is nigh...

In Trench 1, the black features are getting bigger and bigger- it is still not entirely clear whether they represent burning in situ or material dumped from elsewhere. It's not just about burning though; in the north-west corner of the barrack, a small north-south linear feature found when delving below the current layers looks like a beam-slot- but from what? It appears to pre-date the material we assume is part of the industrial phase; perhaps part of a very early barrack. Unfortunately, we won't have much chance to explore this further- it is just a tantalising hint of what else remains in the trench. Stephen also had a good go at turning one of our pits at the south end of the barrack into a sondage. He hit something that looked like natural, but only after going through a good 0.5m of soil-like material containing fragments of bone and industrial residue.

In Trench 2, the area in front of the bath-house remains interesting. There is now a nice metalled surface at the bottom of the main section/slot. The metal working area also continues to produce more crucible fragments and other related material, as well as some more post-holes. In between, there is a confused spread of stones and clay which keep looking like they are going to turn into something but never actually do. Finally on the western side of the bath-house, the putative gully has transformed into a definite gully with capstones in places. Nearby a  number of stake holes have appeared within the demolished porch- these must either be earlier, or alternatively cut from a higher level but only surviving clearly where they pierce the compacted gravel.

The metal dectorists continue to perform a valuable surface, recovering today's nicest find, a small bronze sea monster or sea creature (or as some have suggested, the Lambton Worm....). 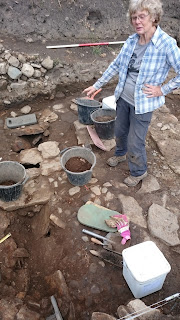 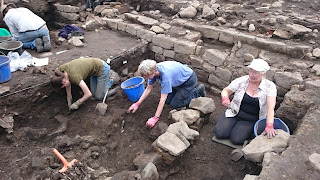