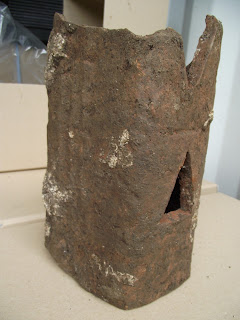 Dull and overcast day punctuated by a bit of drizzle and lots of visitors. Unfortunately I was away for much of the day, so this is only a brief report.

In Trench 1, we struck more natural! Poking around in the bottom of the strange building to the west of the barrack has produced an area of sandy material that looks like it could be proper natural (although this remains to be confirmed). Elsewhere, our big burnt patches continue to expand- we now have three distinct, but amorphous blobs of burning in the northern compartment of the barrack - these have produced crucible fragments and possible hearth lining.

In Trench 2, we're trying to draw a line under our work in the bath-house. We're finishing off recording and tidying up. In the southern part of the corridor Sue has identified the tops of four pilae, which will allow us to calculate the spacing of these hypocaust supports. In the northern part of the corridor Steven has shown that some of the later floor level is built upon a dump of earlier demolished material, which included a number of fragments of old flue tiles that had been knocked off the wall, as well as number of iron t-clamps.

Outside the bath-house Morris continues to take down the section in front of the bath building- revealing more layers built up against the main structure. Elsewhere, more cobbles, more surfaces, more gravel layers.... 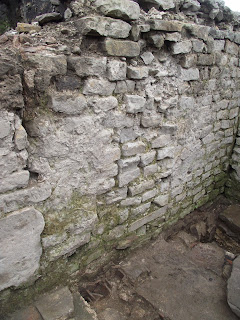 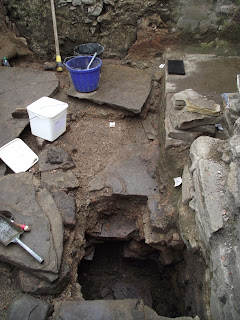 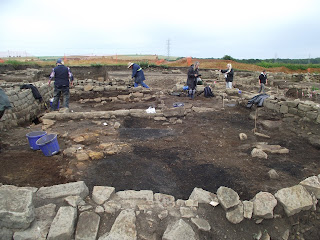