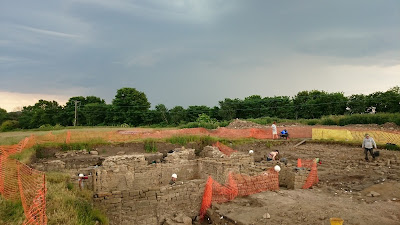 Another sweltering day, although we did have a mid-afternoon lolly break! The heat wave was finally broken by a massive thunderstorm directly over the site, so we knocked off a little early.

In Trench 1, more picking away at the barracks. A nice flagstone floor is appearing in the officer's compartment to the north of the building. A splendid range of nice finds, including some samian with maker's marks and several fragments of stamped amphora- I am pretty sure this is the first example we've seen in the entire excavation.

In Trench 2, more picking at external surfaces and plenty of context sheets being filled in . We've also decided to take a closer look at the surface Laura uncovered yesterday, so she will take down the adjacent section of stratigraphy leaving just a baulk. In the bathhouse, our section of hypocaust which we planned to explore and expand came to an abrupt halt, when Sue and Karen hit the foundations of a substantial cross-wall that runs west-east across the corridor (to the north of the standing cross-wall) - it is not clear what this is. It may have been a feature of the first phase of the bath-house that was demolished in the reworking of the building or it may conceivably relate to an even earlier structure. 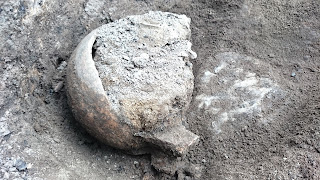 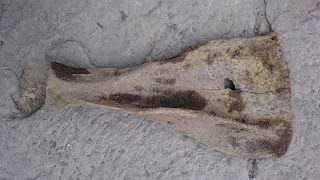 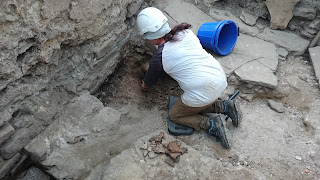