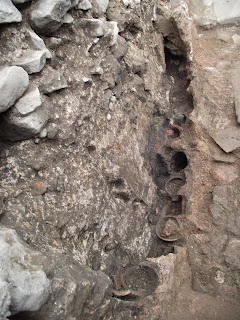 Apologies for the absence of a blog entry yesterday- I simply ran out of time. The last two days have seen plenty of new developments across the site.

In Trench 1, the confusing sequence of drains/gullies on the northern side of the fort between the curtain wall and the northern gable of the barrack is simply getting harder to understand. We now have four (or maybe even five) separate courses of more or less parallel gullies more or less adjacent to each other. The chronology is uncertain, but whatever the dates it is hard to see how this precise curious arrangement came into place Combined with the shifting gable end of the barrack itself, this 2-3m strip of site has seen a complex sequence of building and rebuilding - it may have been related to issues with subsidence, but that is only one hypothesis. There are other hard to understand features in the immediate vicinity including the odd setting of stones within or beneath the road surface to the south of the bread oven. Hopefully, it will all clear up as we continue to dig (although in practice, the more we dig, the more confusing things get).

Within the barrack interior, we continue to reveal more drains including some north-south drainage features as well as lots more post-holes (probably around 50 in total). It seems increasingly likely that these represent the earlier timber barrack. We've also had a more of the strange voids which appear to be stake holes cutting through the hard compacted surfaces - but which never filled up with a later fill- even more surprisingly we've found similar lines of voids in the road surface in Trench 2.

Over in Trench 2, we've seen more progress on peeling back the surfaces of the side road - we've also more fully revealed the foundations of the porch and some associated pavement surfaces - these are currently being planned and recorded, whilst work continues nearby taking down the adjacent surfaces.

In front of the bath-house, we've continued to remove the brown clayey layers - and have uncovered two more kerbs/edge settings to the roadside (at different levels). We can only see these in short stretches so we need to confirm how far they link up into more substantial stone rows.

In the bath-house corridor, the team have finally removed all the baulk that stood in front of the blocked southern entrance. To our surprise, they have shown that the wall they have revealed once contained a series of parallel flues defined by broad ceramic pipes (rather than the ceramic box flues that can be seen in the warm room in the bath-house in the praetorium). These appear to be wider than the narrow pipes with nozzles (tubuli lingulati) known from some Roman baths (see the very useful paper by our own David Mason in the Britannia 21 [1990]) - if anyone reading this has come across parallels we'd be interested to hear. 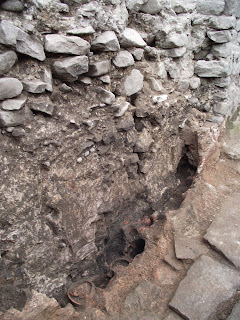 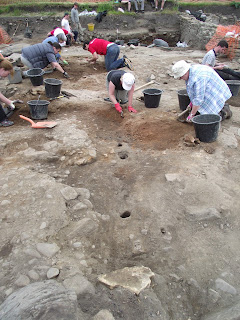 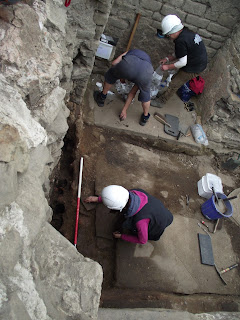 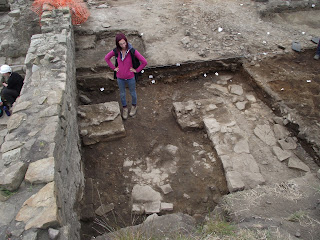 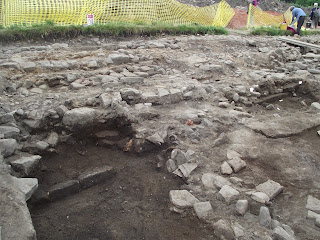