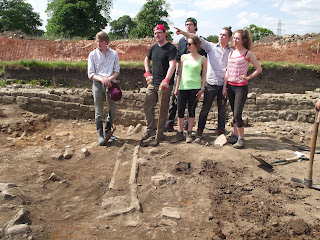 Another good day - everything ticking along nicely. In Trench 1, there has been lots of work in the barrack interior. In the officer's compartment more of the stone drain was revealed. In much of the building there is a gingery/brown layer appearing, seemingly associated with stone lined post-holes and possible beam slots (one in the southern end of the building appears to contain lots of charcoal). Charcoal spreads are also found mixed up with the ginger/brown surface. I wonder whether we are seeing hints of an earlier, wooden phase of barrack structure - possibly burnt? In the strip of ground between the barrack and the western trench edge, we've defined a little more of the small stone structure and revealed a nicely worked stone socket for a timber upright. Across the northern strip of the trench, the team have moved masses of material, particularly in the north-west corner and around the latrine area.

In Trench 2, some interesting developments in the bath-house. Having removed some floor slabs and found a rubble spread beneath it, this has itself been removed to uncover the nicely preserved opus signinum base of the plunge bath. We need to get the rest of this area cleared and perhaps try and suss out the slightly confusing underfloor culverts.

Outside the bath-house, there has been lots of muck shifted in the area between the main building and the strip buildings. This has included exposing more of the well-built compound wall- this has emphasised how late the roughly built stone building that abuts it (or rather partially overlies the wall top) must be, Finally, in front of the bath, more of the edge of Dere Street has been defined and the street surface is slowly but surely going down.

More nice finds- glass bead covered with fragments of gold leaf, and a simple but elegant needle stand out in particular. 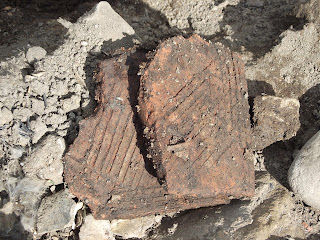 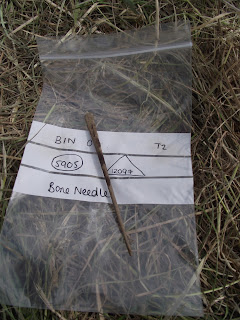 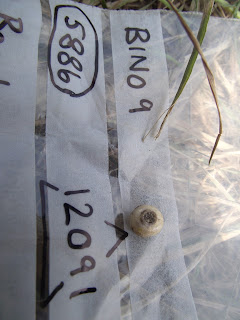 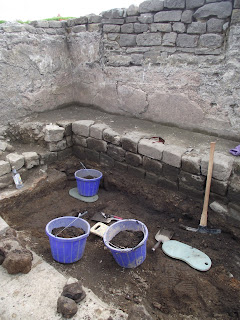 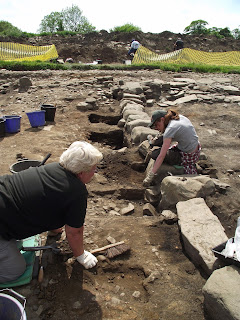