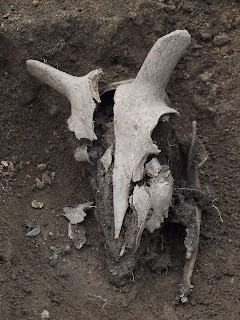 Slightly low on numbers today, as all our BSc students were back in the Department doing a 'masterclass' in environmental archaeology. Not thwarted, we still made great progress on site today.
In Trench 1 all the excitement was at in the north-east corner of the trench. This has always been a less than exciting part of the site- with very little happening between our small bread oven in the ramparts and the drainage gully that runs west-east across the site. We've had a small group of students bravely removing layers of compacted surface here over the last week. Today, they suddenly encountered what appears to be either walling or potentially the extension of a drainage gulley running north-south towards the rampart. There is also a possible curved stone feature- perhaps another bread oven. Whatever it is, it is clearly earlier than our existing bread oven in this area. There is still a need for clarification and clearing here before we know exactly what we've found, but its a reminder that the site can still surprise. In the main barrack block, we are still clearing down to the earlier surface and preparing to plan it. With the increasing number of post-holes and possible linear features we certainly seem to be looking at traces of the earliest phase of barrack so far. One nice find from this area was a pair of worked stone catapult (onager) balls.

In Trench 2, inside the bath-house, the main changing room area is almost ready for photographing. We are planning to remove some of the side walling of the culverts to give us a sondage into possible earlier layers. In the corridor, we are also preparing to carry out a little careful probing into possible earlier stratigraphy including exploring an odd patch of opus signinum. In the southern end of the corridor, Sue and Karen gave the blocked doorway a good clean up- it is now clear that the blocking was done quite crudely and was not done in a careful clear manner.

To the south of the bath-house, the surfaces continue to go down- having commented yesterday how little jet we'd seen so far this season, the team promptly found two jet beads in this area today. In the roadway to the west of the bath, we've continued stripping the later layers back to a compacted cobble surface which survives across most of this area. However, along the northern edge there has always been a browner strip of deposit (which today produced one of the very few sheep/goat skulls we have found). Right at the very end of the day, this area unexpectedly revealed a short length of north-south wall that runs under the cobble road surface. Rather unexpected! My current (and quite possible entirely incorrect hypotheses) is that this is part of a structure built alongside the bath and used as an early changing area for people using the open exercise yard. It is possible that when the baths were reshaped and the new internal changing area constructed that this exterior changing room was demolished. The wall certainly seems to be placed under a road surface containing lots of construction debris which I've suggested is related to this refashioning of the bath-house. However, knowing Binchester, this will turn out to be something entirely different! 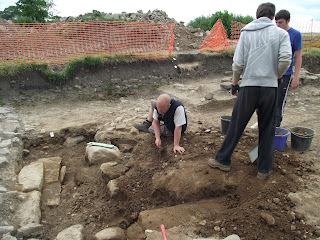 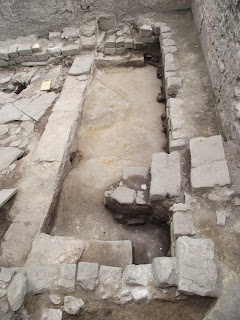 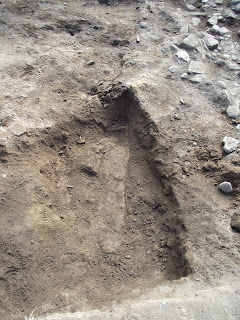