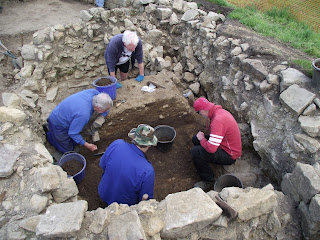 We're really hitting our stride now - the student and the volunteers have all got their jobs and are storming ahead. In Trench 1, great progress, with lots of soil being moved. In the corner tower, we seem to have hit a floor surface at the same level as the foundation slabs, which is now revealed and recording is started. Outside the building, there is more progress bringing the levels down - this has revealed more of the exterior of the latrine, including what might be a blocked up doorway, although this is still not certain. Just to the south, Alice and Krishna have done good work dismantling the later phase of the gully and revealing an earlier phase - they have also started recording this properly. In the barrack, there has also been significant movement. This is most apparent within officer's compartment, where more of the nicely worked stone drain has been identified (will get a decent photo tomorrow) as well as parts of other associated drainage gullies, which have been partly dismantled. There are also hints of other features appearing including possible timber slots and stone lined post-holes.

In Trench 2, our small area of work to the north of the eastern strip building has been useful. Over the last couple of days we revealed a west-east wall base of very large stones, similar in build to the strip building and the late rectangular structure in the bath-house compound. We have been trying to ascertain how this new wall related to the adjacent strip building. The students have shown that is not a back wall to the building, but possibly related to another structure, most of which lies beyond the northern edge of the trench. Between this area and the bath-house, several groups of students and volunteers have made short work of getting stuck into the removal of the side road surface and the associated drainage gully features and have been bringing up some nice big lumps of bone. Whilst in the bath itself, the work on the main changing room has reached a stage where recording is now necessary. In the next door corridor, we are starting to remove the final section of fill, now that it has been fully sampled for mag sus and other environmental data. Recording has also started on the beautifully preserved cistern as well. Our final work area is the section between the bath and the Dere Street. This has revealed a nice kerbed edge to the road; the aim is to ultimately expose as much of the front of the bath-house as possible.

Plenty of nice finds- lots of pot, a strange lump of iron sheathed in copper, another ring (and the news that the 'copper' ring found yesterday was actually silver!). 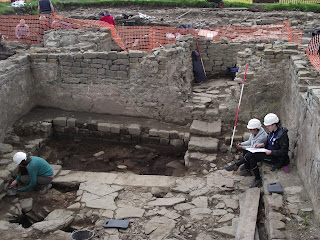 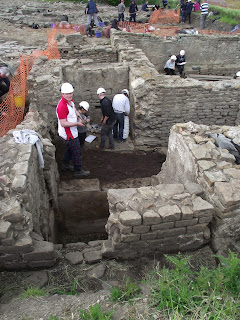 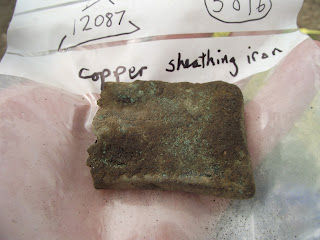 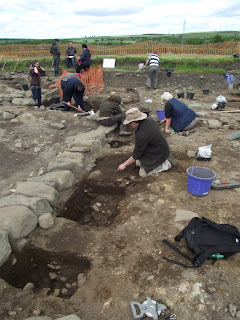 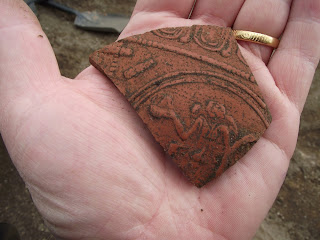 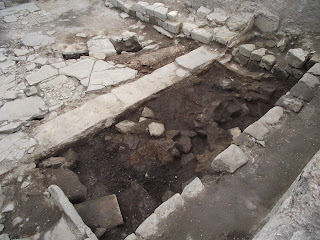 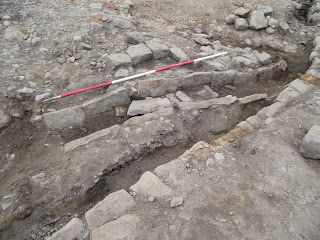