Today was the first day of our second week on site and the first time we've had any real rain, although we cracked on through and it soon cleared up. Rather than talking about what has happening on site in detail today I want to reflect a little on the range of finds we've been coming up with so far. 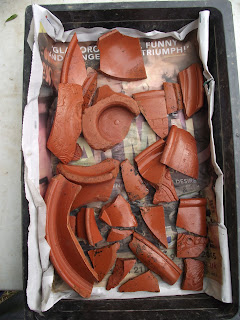 The most noticeable difference between this season and previous years is the changing profile of our pottery assemblages. In earlier seasons the assemblage has been typically late Roman - dominated by the rather unimpressive Huntcliffe/Calcite Gritted wares typical of the final century of Roman rule in the North of Britain. There have been other wares of course, particularly Black Burnished ware and other grey wares and some mortaria. It is noticeable though that the overwhelming impression of our finds trays has been somewhat monochrome. However, now we are more solidly into 3rd and even 2nd century layers, the ceramic profile is changing. This is most visible in the increasing quantity of red shiny terra sigillata (aka Samian). This is the classic Roman high-quality dining ware. Previously, its appearance had been rare and the vessels tended to be relatively simple. But we are now seeing more and more of it; often highly decorated. We have also been finding increasing quantities of amphora.

The range of finds is still wide- plenty of glass, coins, ceramics, and animal bone. It may just be a random occurrence, but this year we do seem to be finding an awful lot of worked bone, particularly bone pins. In one day last week we had 7-8 bone pins from Trench 2, and not all from the same area. These were presumably use for a variety of functions including clothes fastenings and hairpins. Other patterns I've noticed is the decline in the number of jet objects - with the exception of the very fine jet ring, this year there has been virtually nothing made from jet, lignite or shale - again, this may have chronological implications. This year, though we did have our first decent amber item- a beautiful finger ring from the vicus.

The differences in finds are not just reflected in nice objects, but also in the presence of building debris and constructional material. This is particularly clear in Trench 2, where we seem to have hit a layer across the site that appears to be associated with a major period of reconstruction or even demolition in the bath-house. We've had large quantities of window glass, sometimes quite large fragments, from the roadway in front of the bath-house. Along the side road we've had our first significant quantities of CBM. It appears that this track was consolidated or repaired with dumps of demolition hardcore and rubble from the bath. This has also included fragments of painted plaster (which seems to be associated with the earlier phase of activity in the bath-house as opposed to the plain cream plaster of the later phase), and also some large lumps of tufa, which was commonly used in Roman bath-house construction, particularly for vaults. 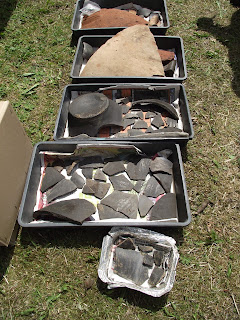 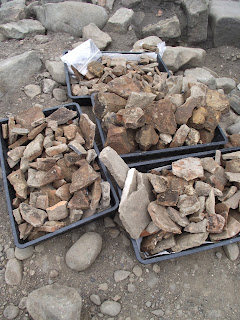 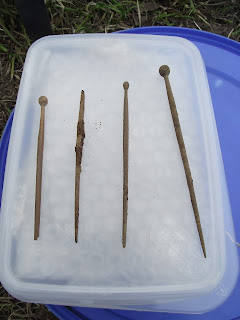 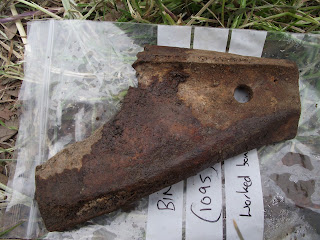 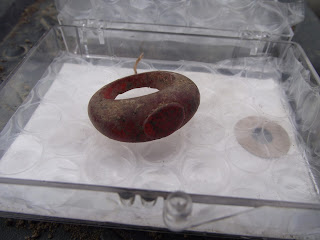 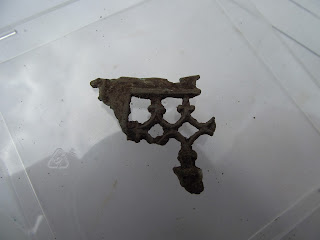 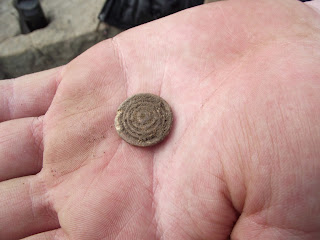