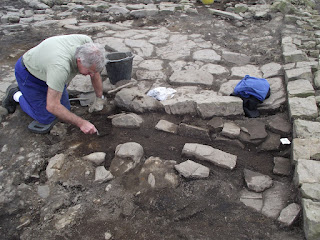 Yet another day without rain! Lots of work got done which was very pleasing. In Trench 1, the last vestiges of the medieval building was removed- although most of it went earlier, we’ve finally disappeared the remaining back wall. However, as we have been finding green glaze pot beneath the flagstones in the southern part of the barrack, it appears we might be making up for this loss by finding evidence for further medieval activity nearby. We are currently facing the possibility that a lot of what we thought was late-/sub-Roman may be of later date. We are really going to have to pull our fingers out and sort out some C14 dates this autumn. It is certainly clear the remains are very confusing- this was highlighted splendidly today when in dismantling an area of certain medieval wall, Jonathan found what appears to be a fairly carefully placed bottom half of a Roman pot, beneath which was more green glazed pottery… The big question is, does this impact on the date of the cattle bones and pits? I still feel they must be late Roman or early med as they as so similar to the butchery activity in Phase 9 of the excavations on the commander’s house. Meanwhile, we’ve been seeing some very interesting developments. Firstly, we now have a second series of post holes running parallel with those found earlier this week but closer to the edge of our trench. There are a number of possibilities- these could be part of a freestanding timber building, but I think they are more likely to part of a lean-to structure constructed against the wall and rampart. Even more surprising is the discovery of another stretch of wall. Earlier this season we found what we thought was a stretch of gully similar to that running along the south-east rampart. However, rather than being a gully, it has turned out to be the top of a wall that survives to the depth of at least five courses and appears to be seated on a cobble/gravel surface. This wall runs only about 30-40cm to the north of the gable end of the barrack. It is clear from this and the slight stretches of wall running parallel and to the east of the barrack that there are significant elements of other structures that still remain to be discovered. Nice finds from this trench today include another possible spearhead, a bone gaming piece from next to where yesterday’s die came from(!) and a beautiful jet hairpin. Things are less busy in Trench 2 at the moment, with a lot of planning slowing things down. Nonetheless, Steven and Martha did some impressive stone moving and removed the large flagstones that lined the base of the large pit in the far north-east corner of the trench. This will allow us to start removing the underlying deposits. In the adjacent room, we’ve removed the red burnt layer. There was also more work in the central sector and on the Building 1 flue (where we had a well preserved coin). Other nice finds included a bone hairpin and a possible fragment of bone that was in the process of being worked. 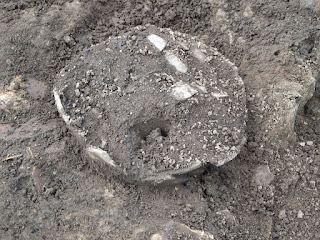 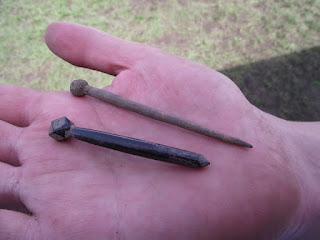 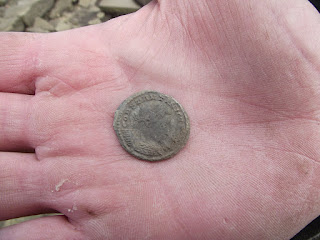 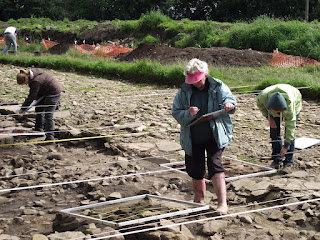