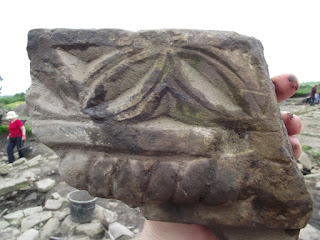 Wonderful weather today (although it's chucking it down as I write this). Lots of people on site so we made good progress. In Trench 1, we got some photos done of the pits at the very southern end of the barrack and have started unpicking the stonework inside it. Just to the east, in the new extension, we're still slowly cracking through it and have now reached the Roman road surface - it is possible to see that like the remaining wall of the medieval building, the revetment and associated features are clearly separated from the road surface by a distinct layer of dark soil. Lots more unpicking done along the course of the road- pleasingly, a tiny stretch of walling running parallel to the barrack was found. This lines up precisely with a random stretch of wall we found last year. Intriguingly this wall line more or less marks the boundary between the area of large cobbles/stones which forms a distinct feature running alongside and adjacent to the barrack, and the smaller stones forming the intra-vallum road. Still not clear how they relate to the barrack though- is it an earlier structure? Inside the barrack, we've started dismantling the flagstones that surrounded and partially formed the nice pit in the central section of the building. This is revealing a possible clay surface beneath it. In Trench 2, lots of planning going on- meanwhile work continues in the western section around the flue and other indistinct features, also starting to dismantle the flue in Building 1. The large dark open area between Building 1 and the bath- building is still going down- there is a possible spine of rubble running due east from the worked stone plinth, although it's probably not structural. Otherwise business as usual. Nicest find of the day- fragment of worked stone (possibly from an altar?) - pictured- found by Jonathan- however, frustratingly, it came from the area of the spoil heap :-( 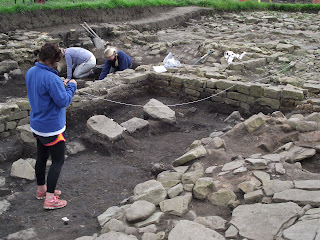 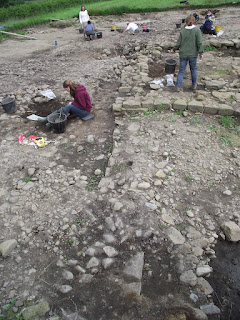