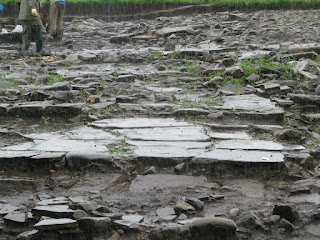 Many apologies for the lack of post yesterday -events conspired against me. Today we have a contribution from Brad again "Despite raining through much of the evening, the site remained in decent enough condition to continue working this morning. Peter treated the group to a tour devoted to Trench 1 that allowed everybody to take a step back and see how things are coming along. As the morning progressed, Roman era wall stones belonging to the barrack block in Trench 1 were identified along their southern extensions. Though we were sure the structure’s foundation would run further south and out of our excavation cut, it was nice to finally find Roman stone beneath the rougher hewn stone iterations of later period walls. Rosie has continued to work on the drain running north-south and parallel to the eastern rampart of the fort. It will be very interesting to see how it progresses as it meets the north-eastern corner of the trench! Matt has identified a third potential line running at a right angle from the drainage ditch mentioned by Prof. Petts in his post on Day Nineteen. In Trench 2, Laura resumed work defining features of an oven flue located on the north-western edge of the trench. In its present state it runs two courses high and has been cleaned of its clay sediment. Also within the north-western quadrant, possible wall stones have been identified adjacent to large paving stones lying at a right angle from Dere Street. Is the area finally revealing to us some of its secrets? Within the bath building (Building 3) excavation of the interior wall has been progressing wonderfully. We are beginning to uncover nice segments of wall plaster, some of which maintains a reddish colour. It’s always fantastic to find good pieces of plaster in Britain, so we’re hopeful of more to come! Rain clouds rolled into the area during the afternoon and put an end to what might have been a very productive day. With luck the weather gods will take pity on our poor souls and not muddy the place up too much over night."
Posted by David Petts at 11:31