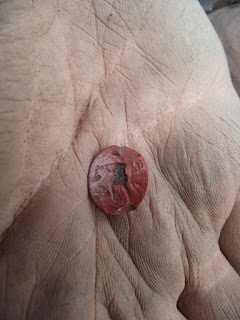 I was off site most of the day as I had a meeting up at the Roman fort of Whitley Castle (Epiacum), high in the North Pennines, near Alston. However, I did get to spend an hour or so at Binchester this afternoon. In Trench 1, a slight technical issue, when we uncovered the modern water pipe, but we soon had it cordoned off. Otherwise, in the barrack, there was more unpicking of the big pit at the southern end. Yesterday, the base of a small oven or kiln was revealed, but this may be of medieval date (inevitably). In the meantime we did some good work along the western edge of the barrack, at one point we've found a possible edge to a large pit (or even ditch?!). This produced a nice intaglio carved from what looks like red jasper (well done Jonathan). When it's cleaned up we'll get a nice photo. At the northern end of the barrack, we saw more work on the new wall, we're starting to have a look at it in several places along its length, and also explore how it relates to the possible westerly extension of the gable end wall. In Trench 2, more planning and recording. Although in the eastern end of the building, Steven and Martha have made great progress following their epic stone moving yesterday. They've exposed the western niche and have identified another possible wall in the base of the pit. Just to the north, we've also got more stone-line pit appearing. Nicest find from Trench 2 today, a silver denarius (but from the spoil heap...) 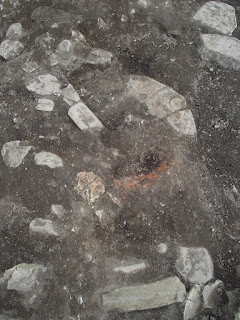 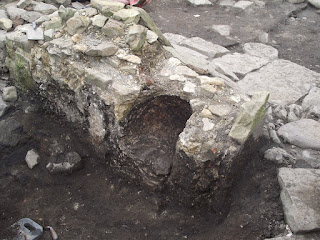