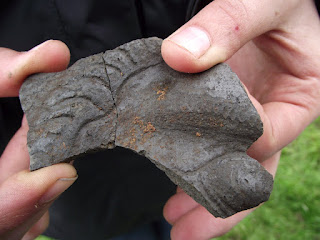 We escaped the rain most of the day until about 3.30, so we got plenty of work done today. In Trench 1, work continued taking down the level of the extension to our trench. Among the nicer finds from here was a large fragment of a grey-ware head pot (see picture). There was a lot of drawing and planning on the small rectangular building, as we are looking at dismantling it in the near future. The group working on the rampart did great work cleaning and in the area close to the tower they found a large stone slab whilst they were looking for the clay edge of the rampart itself. Is the slab part of a wall? Too early to tell. The nice stone drain at this point was found to begin curving as it neared the corner of the fort- it is possible it may connect with the gully next to Hilly's Pit. Lots of work underway cleaning around the barracks and defining some of the patches of flooring within it. It's now possible to recognise a rather nice internal feature, possible a base for a small oven? Finally at the south end of the barrack, we've found a small feature that may be another oven. There are a number of fragments of partially worked stone here, one of which may be an ingot mold. In Trench 2, there was lots of work cleaning the two strip buildings; the eastern one was photographed today. Some more nice finds, including several fragments of glass and a possible hone stone. Elsewhere, the cleaning of the section of the 18th century ditch failed to reveal any Roman features in section. We've begun to dismantle some of the stone spreads in this area. Finally, at the eastern end of the site, the northern and eastern edges continued to be cleaned back. The section of wall in the eastern section is coming up particularly nicely, with more evidence for internal wall plaster. Fingers crossed for the weather tomorrow- if it's as dire as predicted, we're looking at a day pot washing!
Posted by David Petts at 12:47